Yesterday was a busy day. It was the second day at my horse riding job. I ended up riding two horses that I didn’t ride last week, and one I did. I rode Diamond, who is a paint horse. He’s small compared to Gucci, but that’s okay. I understand that Gucci is huge for his breed. But Diamond was a little wild but that’s what makes them fun. He goes into frame fairly easy and moves off your leg nicely.

After Diamond I rode Sonny, another paint horse. He’s about the same size as Diamond, 15.2 hands. We worked on lateral movements, shoulders in and doing some more movements to get him to move off my leg. We did circles and figure 8’s as our bending exercises.

I also rode a warmblood who’s name I forgot. I really enjoyed riding him even though he was a challenge. You have to be very strong with your right side, so he doesn’t blow through it. I have to do this with Gucci too, so it was something that I was familiar with. He has a nice canter, but I let him go a bit to fast for the trainer’s liking. He’s harder to get into frame when he’s a bit fast, so we had to slow down so he went into frame.

After riding I meant to come home and do my blog, but I sat down on the sofa and that was all she wrote. I took a nap which I apparently needed. I did toss and turn most of the night and woke up feeling super anxious, so I guess my body needed the recharge.

For day 26 it wants me to post an old photo of myself. I don’t have any old photos of myself on the computer but I do have some newer ones. But I don’t want to give too much of myself away, so here’s my photo I chose. Its one of me riding Gucci and heading to the trails that my boyfriend took of us. I really like it because it just makes me feel peaceful looking at it, and I remember how centered I felt. 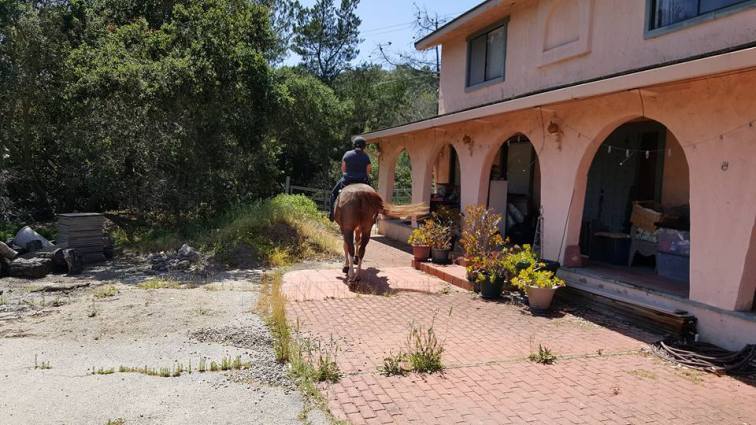 Day 27 wants one of my favorite recipes. I have so many I don’t know which one to choose. But at the holidays I love doing the cheesy pull apart bread. This is from Pintrest.

1. To make ahead, after wrapping with foil, wrap with cling wrap as well. Store in fridge overnight or freeze to store for longer. To cook, thaw then follow recipe instructions to bake.

2. The denser the bread, the better the pieces will hold together when pulled off.

4. **Update** A reader reminded me of a fabulous “SPEEDY” tip that I should share with you! Instead of melting the butter, cream it. Then cut diagonal slices (in one direction only) and use all the butter and generously spread it in each crack, on both walls. Then cut the bread to make diamonds and as you drag the knife through the bread, it will spread the butter into the new crevices you are cutting. This doesn’t provide quite the same even coverage of butter but for a speedy version, it is a small compromise. Thank you to CJ for the tip!

It is so yummy. You can do it with different cheeses’ and different kinds of bread. I love doing it with sourdough bread the best. But I also do it with french bread and dutch crutch and they always turn out good. And it’s always a hit during the holidays. Its rare if there is any bread left over, and I’ll make 2 or 3 loafs.

So last night we watched Pirates of the Caribbean: Curse of the Black Pearl.  I know that I hadn’t seen it in a long time, and I don’t think my boyfriend had either. But between that and a friend posting a picture of her coloring in a book we both have that I decided to start coloring again. I chose my Lost Oceans book because it seemed appropriate with the movie that we were watching. And that’s the book my friend colored in.

So I opened up my book and saw that I had started a few pictures, but that I had never finished them. So I guess I have a lot of work to do on those. I haven’t colored in a couple of days so that’s probably a good thing, knowing that I have a few pictures that I need to work on. Last night I worked on the seahorses using my prismacolor pens. I think it makes it look cool but sadly the ink bleeds through onto the image on the backside. My boyfriend says that I can either stop using the pens or have a really tripy background image on the picture.

I’ve spent most of the day watching anime and coloring. I worked on the seahorse picture. I also did some research on how to make tails in a different way. I started to work on my yellow team tail, which is meant to be a rabbit’s tail, but it isn’t working out right. I made the knots too tight and close together, and working with the wire is difficult. I think that I am going to start working on either the purple team or the blue team tail. Its a simpler idea but uses the same technique that I will use for the yellow team tail. I think that jumping into the hardest tail (even though I didn’t recognize it would be) wasn’t the brightest idea.