I know I didn’t last the whole year, and I didn’t even start on time this year. But I’m going to try again damn it. Hopefully I’ll do better this year. I just have to get back in the habit of blogging.

So lets see. Christmas was good. We did Christmas at my parents and at my brothers house with his in laws. It was fun.

After Christmas my sister ordered herself a standard poodle puppy. :: shakes head :: But he is a cute puppy, has massive paws and a puppy body. His name is Lumier, after the candelabra in Beauty and the Beast. We call him Lumi. Poppa calls him looney Lumi. 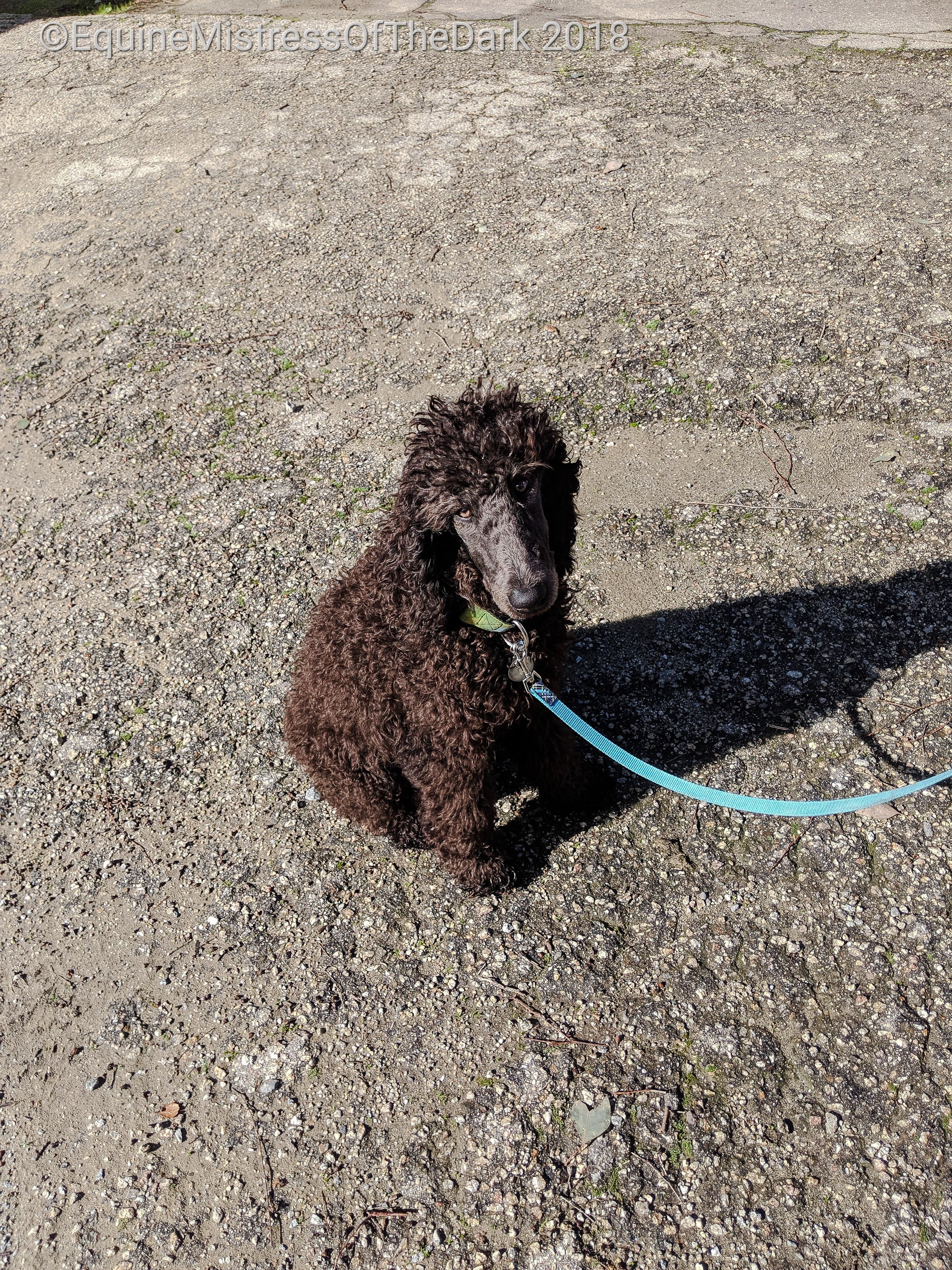 Last night I couldn’t go over and paste him, and my parents don’t have good luck when it comes to pasting him by themselves. They can’t seem to get the syringe in the correct place to squirt it up into his mouth. But that’s okay because they gave him his medicine in his bucket last night and he seemed to eat it. So hopefully he’s back to eating his meds and I’ll get to stop pasting him. Usually it only takes 3-5 days of pasting him to get him back on board of eating his medicine willingly.

So on Monday I went and let the dog out after waking up. He wanted to go to the back of the house and down the hill but I said no because I wasn’t in the right kind of shoes. After I woke up some more we went over to my parents house where we said hi to Gucci and went inside to say hi to Mom and Poppa.

Mom and Poppa hung outside with me as I cleaned the wet shavings out of Gucci’s stall. Mom held onto Gucci as he grazed and Poppa held onto Lumier who supervised me through the fence as I cleaned out the wet shavings out of Gucci’s stall. I dug out about half of it, I got the middle mostly dug out and then I gave him 2 bales of shavings and put Gucci back in his stall. He was so excited that he rolled almost instantly. Shavings everywhere!

We all went inside and Lumier took a nap while the rest of us did stuff. I helped mom clean up a bit, and we watched some Dr. Pol while we chatted and had some lunch. I left and went to go feed Smoke because his parents are away on vacation in Hawaii. Smoke was happy to see me, nickering and tossing his head around.

I stopped and said hi to the cows as I was leaving.

I then came home and worked on the laundry so that I have a uniform for work tomorrow.

I spent most of the night watching family guy and looking at wedding rings. I think I found one I like. But I need to talk to the maker of the ring because I want to change a few things. But its cool because the guy is local and he made Fiks’ ring for him.

Tuesday was fine. It started  off slow with me flopped on the sofa. I talked to my cousin/matron of honor during the morning. She got her dress in and she looks really good in it. She did a good job picking it.

Work went fine. I’m still having issues getting the courage to ask people to take off their hats when they walk into the bank. I dunno why I have such a hard time with it but I do. And it doesn’t help that my bosses have started to do surprise inspections on me.

Wednesday started early. I went to the grocery store and got what we needed while listening to the Sing soundtrack. Then I went over to my parents place to say hi. I had to paste Gucci today, which sucks. I have to have some one hold him for me, today that was mom. But grass is the pallet cleanser apparently so we grazed for like 10 minutes after the pasting.

I played with Lumi some when I was done
with Gucci and then I sat down and hung out with mom and poppa until it was time to go and get my hair done. I was bad and hadn’t gone in a few months, I just lost track of time trying to fit it into my schedule.

I showed up a half hour early, but it was okay because she took me early. Makes me wonder if I put it in my phone wrong. I go back in May, 2 days before the wedding. She said that I needed to get on finding a hair and makeup person. Apparently they book up really quickly. She recommended someone in her salon, which I thought was really cool. I looked at her photos on Instagram and I’m not sure. I wasn’t like “Oh my god she has to do my hair” from what I was seeing in the photos.

Once I was done I was working my way back to my parents house and was talking to Fiks and found out that he was having lunch. Well I was hungry and I went to join him, surprising him which made me smile. We did lunch together and then went over to my parents house to pick up the cold groceries that I had sitting in their fridge. We said hi to Gucci who looked like we woke him up from his nap.

Fiks came home and I went over to feed Smokey. He was still brown, and he doesn’t really know how to eat carrots so its always interesting to give him one. It took him multiple tries to eat the carrot which made me laugh. I’m used to Gucci scarfing his down.

When I was leaving the cows were out grazing so I stopped to say hi to one of them. 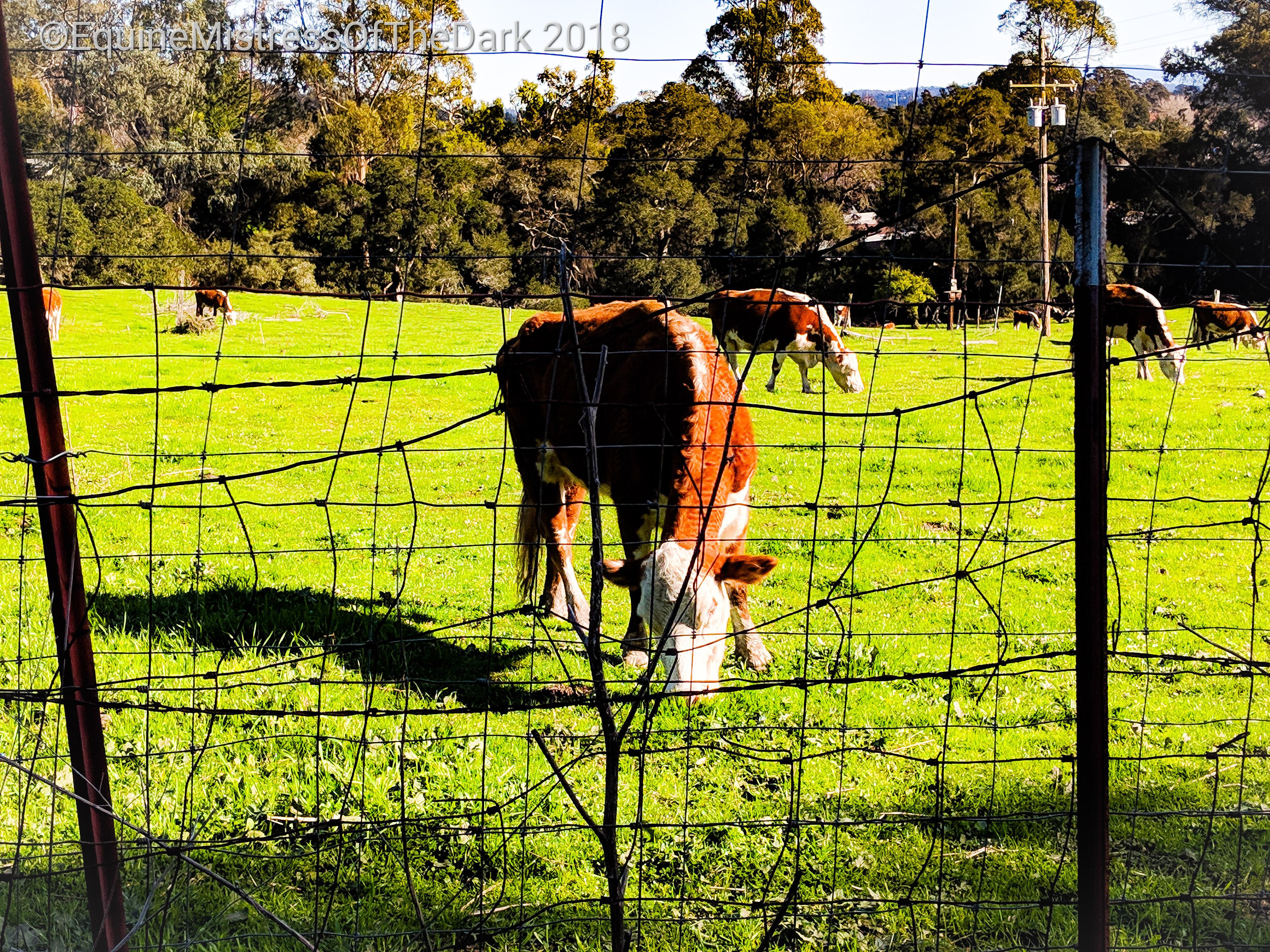 I spent the night coloring. I haven’t done it a lot lately and I forgot how relaxing it is. I colored in my swear book, so I won’t be able to show all of the pictures. 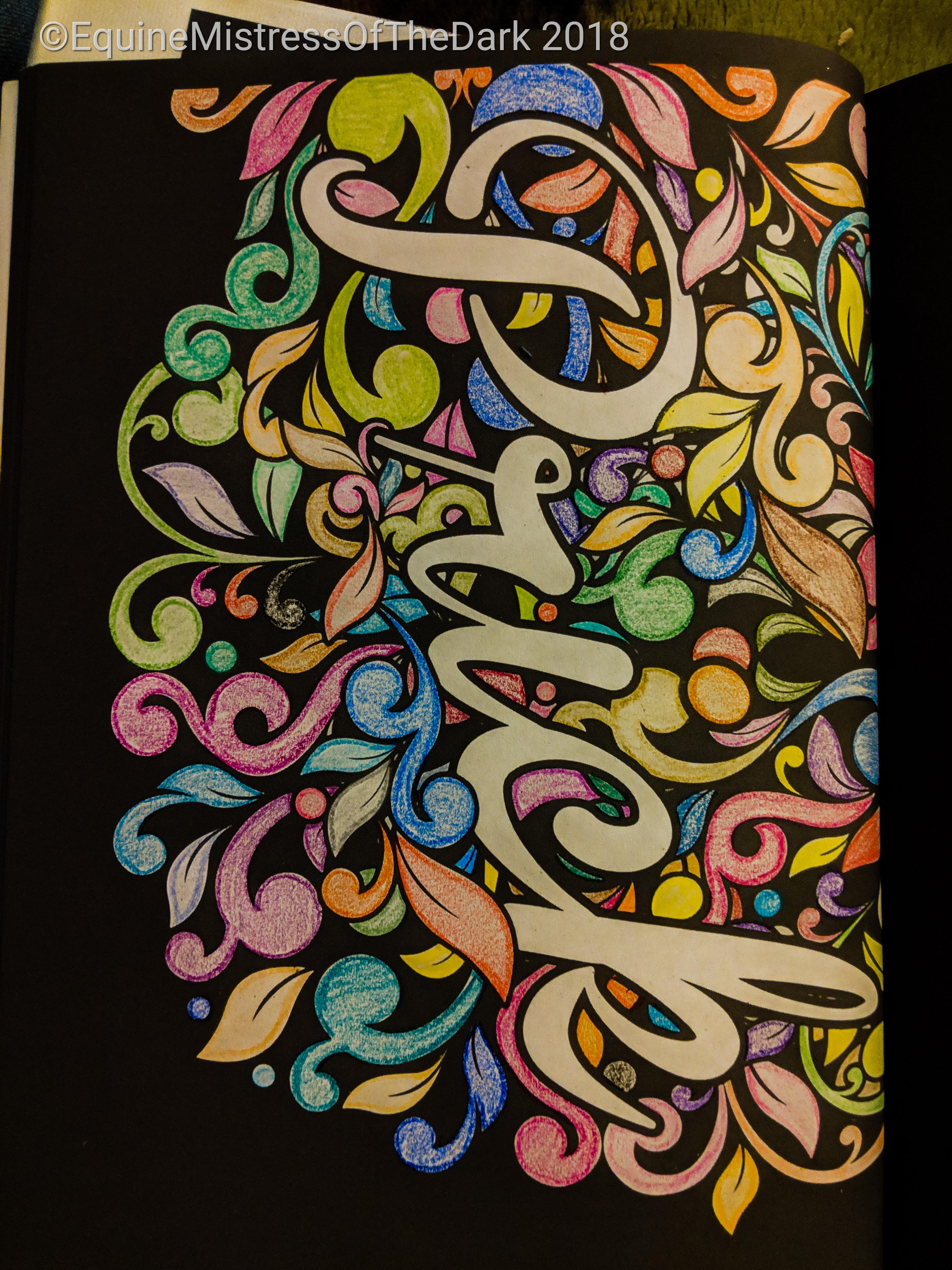 Thursday started early again on a night of poor sleep. I couldn’t get my brain to shut up. But I went to my doctor and we put me on a new anxiety medication.

Then I came home and the cable and internet were out so I threw on Beauty and the Beast to take a nap to. Didn’t really nap, but I felt recharged. Then I went over to my parents house to give Gucci his medicine. Mom helped me and then we changed his blankets and let him graze for a while. Mom and I talked about hair and what to maybe do with it. 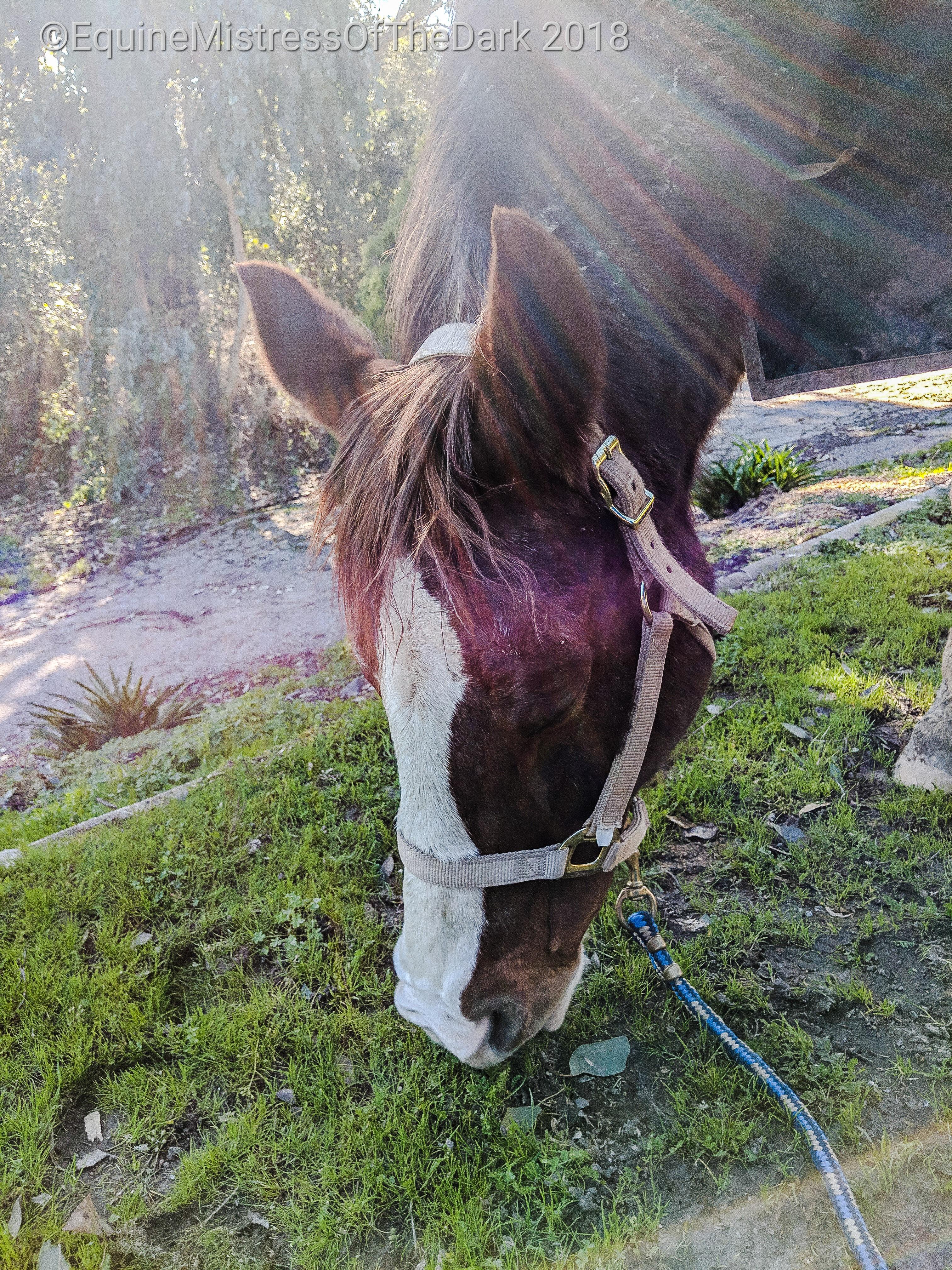 Work went fine. It was very slow. I got lots of compliments on my hair which was nice. Then I came home and Fiks was making tacos for dinner. He is amazing. I feel like I can never say that enough.

Friday was another early day. I woke up and went over to my parents house to paste Gucci before work, so I wouldn’t have to do it in the dark after work. As I’m driving up I see Poppa way off in the field. I can’t figure out what he’s doing, but I went and saw Gucci and gave him his cookie. I poke my head around and poppa is being drug through the field from a bouncing Lumi, who came and pounced on me. We went inside and I said hi to mom, Lumi proceeded to be nuts, and I made Gucci’s medicine. Poppa helped me paste him.

Afterwards we fed him breakfast and Gucci decided to try and help poppa with loading up his hay bag. 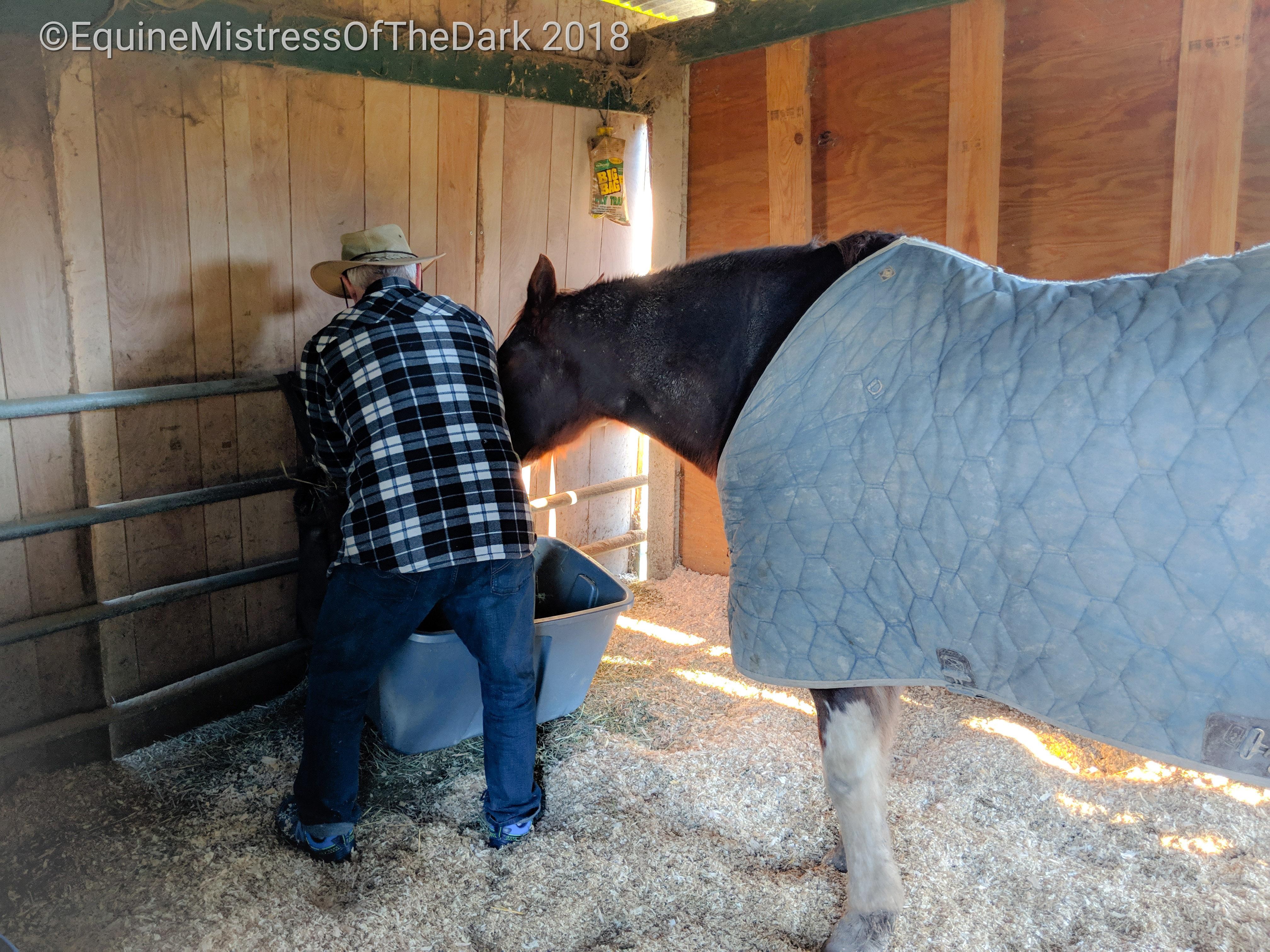 Work was weird at first. I got snapped at for wishing someone a nice day. The bank just had a weird atmosphere for most of the day, but it was uneventful. Poppa did a drive by and gave me a muffin for breakfast tomorrow. Oh, on my lunch I bought a dress. So that’s something fun I don’t usually do.

I came home to this…

So I got dressed up too  (in my Haunted Mansion dress) and we went out to our favorite Sushi place down the street. We tried something new, it was octopus tentacles wrapped in batter. It tasted really good, it just wasn’t my thing. I think if I hadn’t eaten one whole and had let it cool off I would have liked it better. After Sushi we went and got ice cream. I jumped on the computer to work on wedding stuff and we actually got something accomplished, yay!

Saturday went fine, work was steady. I kept getting a call from a 800 number on the work phone, which was annoying. I almost finished my book that I’m reading, Dark Places. If I don’t finish it when I go to bed I’ll finish it tomorrow at work. Fiks went down to SSD for the weekend leaving me all alone :: sniff sniff :: I went over to my parents to paste Gucci after work and hung out with my mom and Loony Lumi for a little while. I left because I had to get to the pharmacy before it closed to get my medicine, otherwise they’d put it back on the shelf. Came home, made some pizza, and watched some Netflix.

Sunday was alright. I didn’t sleep well Saturday night. I was fine when I went to bed, then I woke up at 1, and I’m so used to Fiks being there I can just roll over and go back to sleep. So I struggled going back to sleep, but the day went fine. I had a lot of golfers and people going to the restaurant. Fiks was home when I got home, so that was nice. We did the laundry and I watched TV while he played on the computer.