I woke up obsessing again.

Its wasn’t over anything bad. It was over where to camp at Feast of Mars (which is in the first week of October), and The Jungle Book. True, I was listening to the audio book last night so I guess that makes sense. And then I woke up my boyfriend listening to the new and old soundtrack. Oops..

I just discovered that Audible is having a 2 for 1 sale right now until May 15. They have a pretty cool selection going on. Go! Shop! If you’re into audio books that is. I picked up The Raven Boys and The Nerdist Way.

After my long day yesterday I decided to watch Into The Woods with my parents. I really like musicals and this has quickly become one of my favorites. It has a great cast, and oh my god the power behind some of the voices, like Meryl Streep. In part of one of the songs she’s in I get goosebumps every time. And this is a scene and a song that makes me smile every time. And the waterfalls are around where I grew up so I get a little bit of home seeing it.

So yesterday we decided to do a last minute spur of the moment trip and decided to come up to Rohnert Park to visit a friend and play amtgard at Crimson Wood. It was there coronation yesterday and our friend was getting an award and so we wanted to be there when she got it and help celebrate. So we piled all of our gear in the car and took off. After a quick stop at a donut store for breakfast.

After 2 hours of driving and seeing a bus still smoking and melting after being on fire, we finally arrived. So we unloaded our stuff and geared up to start playing. I started off playing with sword and board (shield). And then I moved onto pole (the blue and white one in the picture) 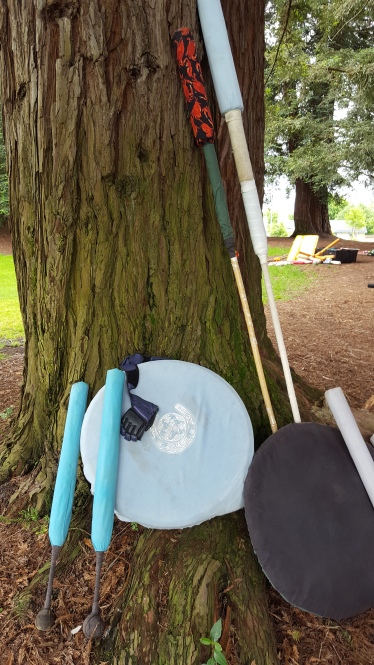 So we did a few rounds of Round Robin: where its 1 on 1 and the winner stays to fight the next person. After that warm up we did a Ditch: Where people split up into 2 teams and fight each other. Last team standing wins. The losing team gets the first person who died from the winning team, and then they go again.

We did this for a good 10-15 minutes, its always fun and a good place to gauge yourself and your opponents for if you play a battle game later. And what did the Champion of the land do? She called a battle game! Yay! It ended up being Pirates verses non pirates. The goal was to get on ‘land’ and steal the necklace from the non pirates. My boyfriend and I played the class of Monk, used our poles as our main weapons and were lucky and both placed on the pirate team. I ended up winning the game for my team by being clever.

I did a ‘sanctuary’ spell where I can walk around without weapons on me and not be attacked. I have to keep yelling out ‘sanctuary’ every few seconds, but that’s okay. So I walked from our ship onto land and started walking around looking for the clam shell holding onto the necklace. I found it hiding behind a tree, but kept playing like I hadn’t seen it until I scoped out my surroundings. No one around me was alive, and everyone was engaged in the fight up by the boat. So I stopped my sanctuary spell, grabbed the necklace, and ran for it. I was hit by an arrow 3/4 of the way to the base which pinned me to the spot, so I had to hand off the necklace, but we ended up winning the round. After that game I called it a day for my knee.

So about an hour after that game the land held court, and did the coronation which is kind of like the changing of the guards. The people who used to be in charge for the last 6 months switch out with the new team who’ll run it for the next 6 months.

With all the new people around yesterday and not being locked up in the rules of the game, my anxiety started to rise and I ended up using a few techniques to calm down. What I mostly used at the field was square breathing. I’ve also called this tactical breathing before.

Our friend invited us over to hang out and for dinner after amtgard, which we gladly accepted. We even followed her to the store to help her get stuff for dinner. The store was busy and I was still kind of wound up, it had been about an hour since I had started to feel frazzled over people. And going to a busy store didn’t really help. I had a plan to color once we got to our friends house, but I was missing a pencil sharpener. We couldn’t find one at the store, so we jumped in the car and went to another part of the shopping complex to find one. My boyfriend was awesome and let me stay in the car. This gave me a opertunity to use my Mindfulness App on my phone and do a quick 3 minute meditation.

Right when my meditation finished my boyfriend showed back up with the pencil sharpener, and then we ran into our friend again. We followed her through some back roads in which we saw horses, cows, and sheep, all the way to her house.

Did you know that there is a Pandora station called The Tiki Tiki Tiki Room where it plays music from Disneyland and Disney music? It plays music from the rides and the park, and then songs. Its pretty cool. I quickly added it to my station list. And then I was locked on to all of the fish tanks which she had and the different kinds of fish. I asked my boyfriend if we could get some and he said it was something we could look into. Yay. We are hoping that they don’t count as pets, because we aren’t allowed any at our apartment. 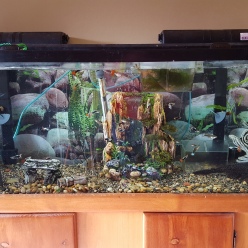 For dinner we did a BBQ pork roast and corn on the cob with pasta. Well, we had set the fire too hot and the fat that dripped from the pork roast onto the flames caused a grease fire. What is the best way to put out a grease fire you may ask? Just click on the link! But baking soda… and turning off the heat…

It ended up turning out good. And so did the corn. Super yummy food. The pork was just rubbed down with salt and pepper. The corn had been covered in butter, garlic salt, and paprika. There wasn’t enough to make it super spicy (yay) but just enough for a little kick, which was nice.