I had one about my cousin last night/early this morning. I think that its one of the few times I’ve been happy she lives in another country because she’s wake and into her day at 5am my time (1pm her time). I’m not going to reveal details, but I discovered that she was fine. So needless to say I breathed a sigh of relief.

But since she was still at work and wasn’t able to talk or respond straight away, I straightened my hair for today. Because we are going to the ZOO!!! Can you tell I’m excited?

I also put on Hercules since I’m awake and I’ve been on a Disney kick for the past few days. I think that’s my plan for either Thursday or Friday, watch Disney movies as I make a tail or two.

One of my FB friends posted this really cool article about an in-ear translator. It really caught my attention because I know that my language skills are really weak now. I used to speak 4 fluently and know enough of 2 more to get around. Now its only bits and pieces of the languages I remember. It’s also cute because they inventor created it because he met a girl who only spoke French. Dawww. This is something I would defiantly keep my eye on and use, especially when traveling. Or maybe it can be used to help learn the language. It’ll be interesting to find out.

I’m throwing around the idea of doing one of those month-long challenges for June. For blogging or for pictures. I did one in November of last year and I stopped about halfway through. I think it was due to a lack of self-discipline and having issues with taking photos with the challenge. So maybe it’ll be a good thing for right now. I still have to decide which one to use…

And input on which you would like to see would be good too. I’m not totally sold on any of them, and I still have a while to choose. Maybe I’ll start one in a few days. Who knows.

So today we went to the zoo. It was awesome. Mostly. A few schools were there on field trips so running and screaming kids rushing up behind me didn’t make for a very peaceful time initially. I became very hyper aware of what everyone was doing and where they were, so much so that I couldn’t enjoy the animals a few times. I did my breathing techniques and a few other of my mindfulness skills to help get me through the day. I also wanted to pet practically everything we saw today.

First we went to the Red Panda exhibit and watched them get their breakfast. The eldest panda wouldn’t let the others come out at first, sitting at their doors and stopping them. I guess that they won’t pass or disobey the eldest. We watched them climb all around in their habitat and say hi to each other. They all chose a different post. 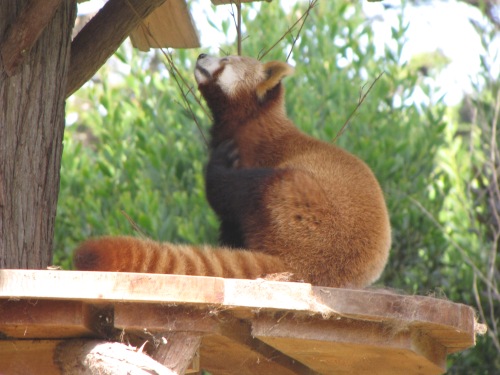 We then walked past the flamingos and took a few photos on our way to the South American penguin center where they were getting fed breakfast also. The zoo times it out so that you can see numerous events back to back. But sometimes you have to rush to get there. We got to the penguin center and saw that they were cleaning the tank, so the water was all gone. But the penguins were happy and chilling on their rocks, some waiting in line for their food. 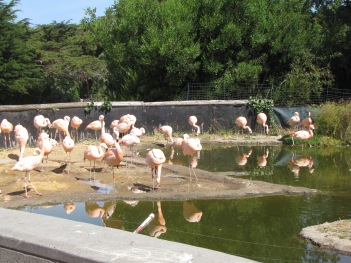 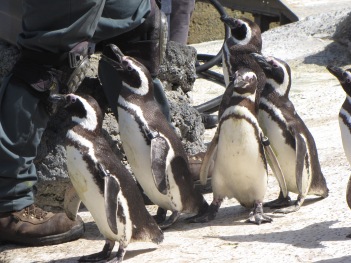 The next display was a hippo who was catching a few z’s in the pool. The very nice and clean pool. You would catch a few breaths of the hippo snoring. Next to the hippo was a rhinoceros who strutted by us on the way to the other side of his pen.

We then walked to where the big cats live. The first pen contained a lion family. The Lion was sunbathing down in the lower area of the pen. The Lioness was chilling up top in the sun and the grass. We didn’t see the cub the first time round, we aren’t sure that he was out. But when we went back the second time he was there, snuggled up against his mom. The tiger had followed the lion’s lead and was sleeping the day away. It wasn’t super warm up at the zoo, but it was sunny, which was nice. 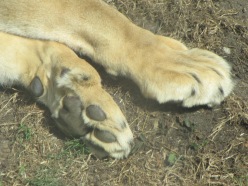 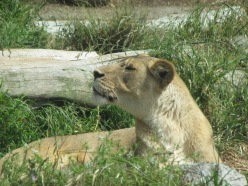 The big cat which was active was the snow leopard. When we had first walked by the pen to get to the other big cats, it was being cleaned. But we went and checked on our way out of the area towards the bears and there he was. The snow leopard is one of our favorites. Huge paws, a tail as long as the body. I just think that they are beautiful as well.

We made our way over to the bears, because the zoo was doing a feeding of California grizzly bear sisters. These 2 bears had been rescued as cubs from Montana when their mom died and they weren’t behaving properly in the wild, breaking into sheds, causing damage and injuring other animals. They had been moved around the state a few times but kept causing problems. When the topic of euthanizing came up, I guess the zoo heard their story and decided to rescue them.

Oh, a fun fact. The California grizzly bear is actually extinct in the state and has been since the late 1800. 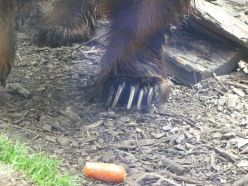 We saw other animals too. We spent about 4 hours there looking at all of them. Or most of them. Some we hit a few times, like the big cats. Some we sat and just watched. We went in a few specialized display rooms for certain animals. It was just a fun day. I won’t bore you with every exact detail. I just wanted to share the ones which I had the most fun and were the most excited about seeing. But here are some more photos of what else we saw.

After we came home I tried to color and do things to bring down my anxiety level, but nothing really seemed to work, so I had to take some medication. It is used as a tool and a last resort, not my first go to.

We also put on Saving Mr Banks. If you haven’t seen it I recommend it. Its the story  of what it took to make the movie Mary Poppins. Another good movie that if you haven’t seen I say see it. For my boyfriend and I we have to watch one right after the other it seems. And I’ll put on Mary Poppins when I’m not feeling well.

For today here is the history of National Police Week and about what it stands for and what happens.