Hey everyone. Happy June. I know I was silent yesterday but I just wasn’t feeling doing the blog thing. I wasn’t up for much of anything yesterday. But I did do stuff yesterday besides lie on the sofa and watch Downton Abbey on Amazon. Part of me thinks that they consulted with George RR Martin for how many characters they kill off and how they killed them off. But anyway, on to yesterday.

So Gucci and I had an appointment with the Vet yesterday. It was time for Gucci to get his spring shots and worming. We also discussed on why Gucci was having problems eating his hay. I made sure that it wasn’t his teeth. The vet believes that it is part of the cushings.  He said that it was okay that it takes him all day to eat a flake of hay, even though his hay does look amazing. So its good news, but frustrating. Apparently he has other horses doing the same thing.

After that I did an errand for my boyfriend and then came home and binge watched Downton Abbey. I just got into the show recently. I blame my mom. She watches it every chance she gets. Also one of the actors is from the town that I grew up in, so its nice to see him again. He was always nice when you saw him around town. Even though in the show they say the Abbey is in Yorkshire, it’s actually down towards London.

During my binge I worked on coloring in the poster my mom got me. I think its coming along great. I still have a lot to do before it is done, but that’s okay.

Another thing that happened during Downton is that I got a call from my boss at work. We are working on getting my old shift back and just getting back to work in general. I’m not cleared for 12 hour shifts yet, but I’ve been cleared for up to 8 hours. And so I was able to pick up a shift for the weekend which will help. But once I get back to my full shift I’ll be less stressed out about money.

I had the first class of my Generalized Anxiety Disorder last night. I showed up a little late but it was okay. At first we did the basics, going over the point of the class. And then we started going over the subject. Just the basics. It was kind of the same stuff that we covered in IOP, just a little more in-depth. We went over the symptoms and the side effects of anxiety, and the different ways it shows. We also did a few exercises. We mostly focused on The Wise Friend exercises. It’s where you take a situation and put down your thoughts and feelings, and then you approach the same situation and feelings like it was a friend having them instead of yourself.

Oh, I could keep you here all day on where I would like to visit. I love travelling. I just saw the article about an airline running affordable flights to Scotland. I think that it would be a fun thing to do with my boyfriend. Just traveling around Europe with him would be a fun and adventurous thing to do. Hit up Germany, Austria, France, Italy… Basically everywhere in Europe.

If I were to move anywhere, I’d love to move to England. I have a lot of family over there so I wouldn’t be totally alone. If not England then Germany I think. I don’t think my boyfriend would complain: Pretzels and Beer. Two of his favorite things. I wouldn’t complain because they have some AMAZING horses over there, and Germany is always the team to watch out for in international competitions.  And that is one of the main places people on the horse show circuit travel to in order to gain more experience.

So it’s still early in the morning, but I like to think that I have been productive. I called about my disability. I have fed Stormfly, paid some bills. Oh, Dickblick is having a sale. And the pens that I have been eyeballing are included in the sale. They are where I got my Prismacolor full colored pencil set.

Needless to say that they have been worn down at this point. Some more than others. But I am still really happy with them. They go on really smooth and the colors are a nice selection. If you are serious or really into coloring I’d recommend them. The set is kind of expensive, but its better than going out and buying the pencils individually which is what I was doing at first. No offense to crayola, they are good pencils too. I just enjoy these ones more. They don’t break as easy and the lead is better in them.

I also went for a bike ride this morning. It was nice to be able to just go and do what I wanted to do. I could hear the roar of the ocean over my music as I peddled along side it. I watches the surfers catching waves, some got up, some didn’t. I marveled at people who were able to ride their bike and hold onto a surf board at the same time. I think I would be highly out of balance if I did something like that. I had good songs to keep me going, setting a nice pace. I did over 3 miles in 18 minutes. Yay.

Oh, yesterday I also talked to my bosses about work. Needles to say that was anxiety enducing. I don’t feel like I can do this job anymore sometimes. Yesterday was one of those days that I felt really that way. I really need the health insurance tho. And when it comes down to it, if I can get my old place back, it won’t be too horrible. I know that I can do my job there. Just seeing the people who I haven’t seen in months and having to explain my absence is… scary. I didn’t really have any friends there, but I had people who I got along with and talked to every shift. I got along well with the bosses.

Well I just talked with my bosses today and they informed me that my health insurance is on the verge of being canceled because I haven’t worked enough hours to pay for my part of it. So I got handed a few overnight shifts to protect equipment for graduation ceremonies at one of the local high school. But its going to make Tuesday day really hard. Tuesday is the day I start riding horses and getting paid for it. But I’ll pull it off. I have to. I can take a nap between jobs, albeit a quick one. And load up on caffeine.

I’m really excited for this job. I’m going to get paid a decent wage to do something I’m good at and enjoy. Isn’t that the dream? It might be only for one day a week, but it is better than what I have been doing lately, which is nothing. Depending on when that job ends I’ll hopefully be able to take a quick nap before my doctors appointment over the hill. Or maybe I could get a ride over and sleep on the drive… hrmm….

I made progress on my little poster. 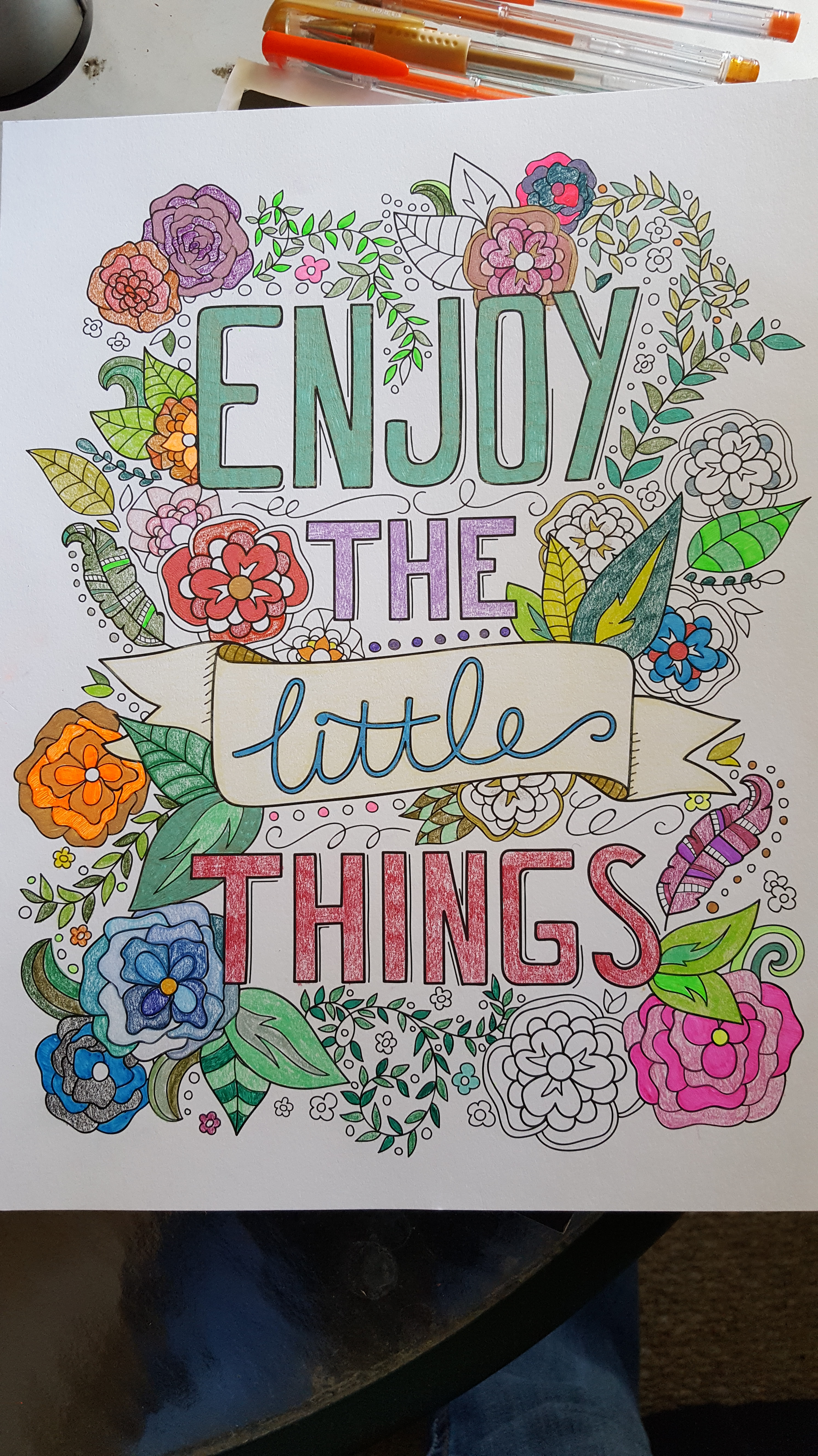 I really need to get better about not taking photos of my legs/feet. But there isn’t a lot left to color. I’m really happy how my Yorkshire, Tudor, and Officer Down roses came out. And the other ones are just whatever colors inspire me.