Hey everyone, I hope that you are having a good day.

Mine has been okay.

My boyfriend left at the buttcrack of dawn to take the King of Westmarch to the airport so that he could go and visit the land in Hawaii. Oh, how the king suffers. Or, to quote Mel Brooks “It’s good to be the King.”

But when he showed up last night we had a nice night. We took him to a local pizza place, where pizza and beer/cider/rootbeer were had by all. And then we took him to a local ice cream place which is amazing. So it was a good night and a good visit with the King. I don’t normally talk to him or see him outside of Amtgard events. My boyfriend talks to him almost on a daily basis. We were going to ask him about the games we want for our Darkshore, but we didn’t get around to it. Which is fine. We have time.

On my way to the stables I stopped by a local battery store and got the battery changed out in my watch which had died at the beginning of the week. So now its working but I can’t seem to set the time because one of the buttons which is used to set it is stuck and now won’t work. So frustrating. Its not even set for the right time zone, so its not like I can leave it alone and just go from the time that is there.

After the battery store I made my way to the stables where I started my day off with Diamond. He was tired after his lesson yesterday. With his owner, not me. He was jumping a course of 3′, so he has the right to be tired. He was a little bit of a wiggle worm while we  were going around, which was a tiny bit frustrating. It means that I don’t apply my leg equally on both sides, so it’s something for me to work on. But besides being a wiggle worm he was good. Tired, but good. Oh, he also drops his inside shoulder whenever we do circles. So we did some circle work and I did my best to keep him balanced from dropping his shoulders in. 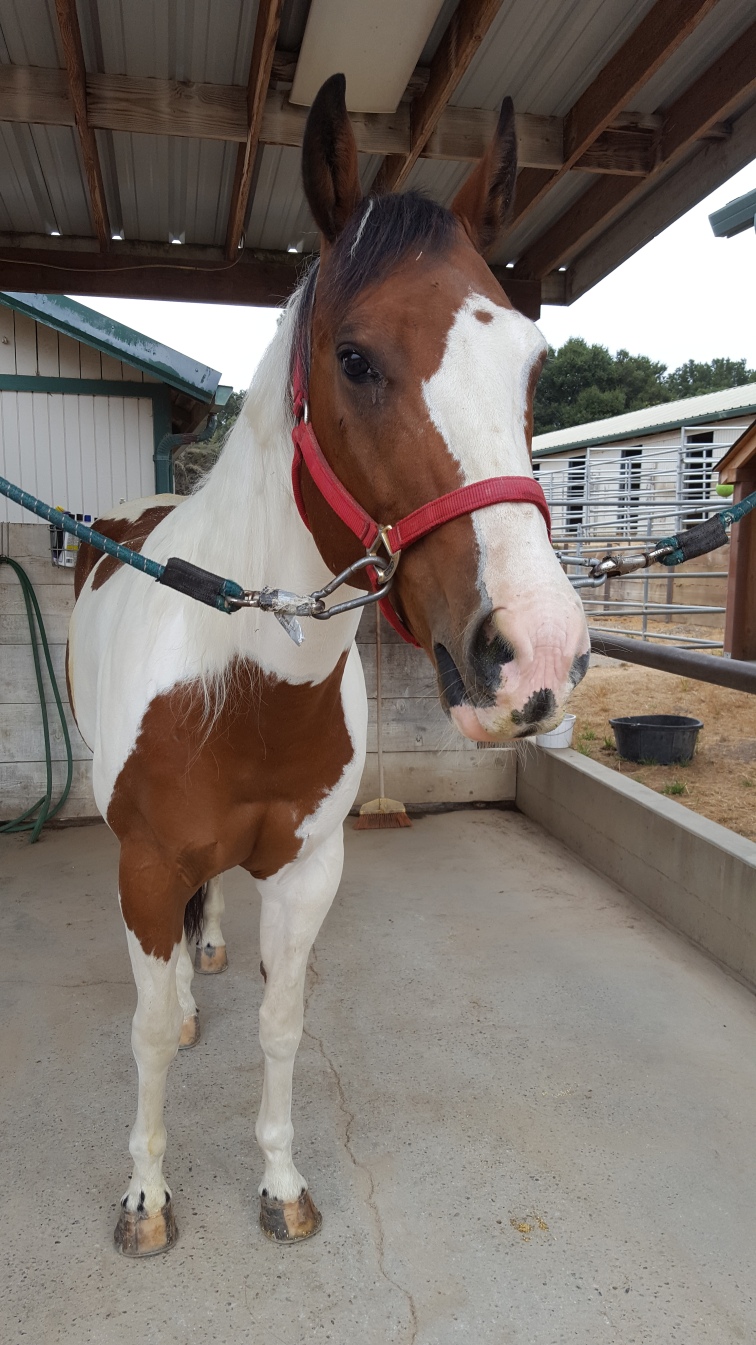 Once I was done with Diamond I moved on to Ella. She was nice and quiet in the cross ties, but as I groomed her I saw that she had some bite marks on her. I think she’s in season and has been flirting with the boys around her. She’s been talkative and kind of mareish. And I know that means nothing to the non equestrians out there. I guess you could compare being mareish as to being bitchy. No squirting, which is gross, thank God. But we moved to the arena and I got on her and we went to work.

We did a lot of figure 8 work and doing transitions so that she doesn’t necessarily hit on the breaks every time I need to reorganize myself. We went around fairly well for most of the ride. When we were cantering to the left she likes to break to the trot with me after a lap or so. And then she gets pissy when I have to spur her on back into the canter. There is nothing wrong with her, she’s just lazy and doesn’t want to keep cantering. So that’s what we do. We canter. A lot. And then we trot. Then we move to the walk.

When I put Ella away her neighbor Blaze came out to say hi. So I gave him a quick pat and took his photo. I think it turned out kinda cute. 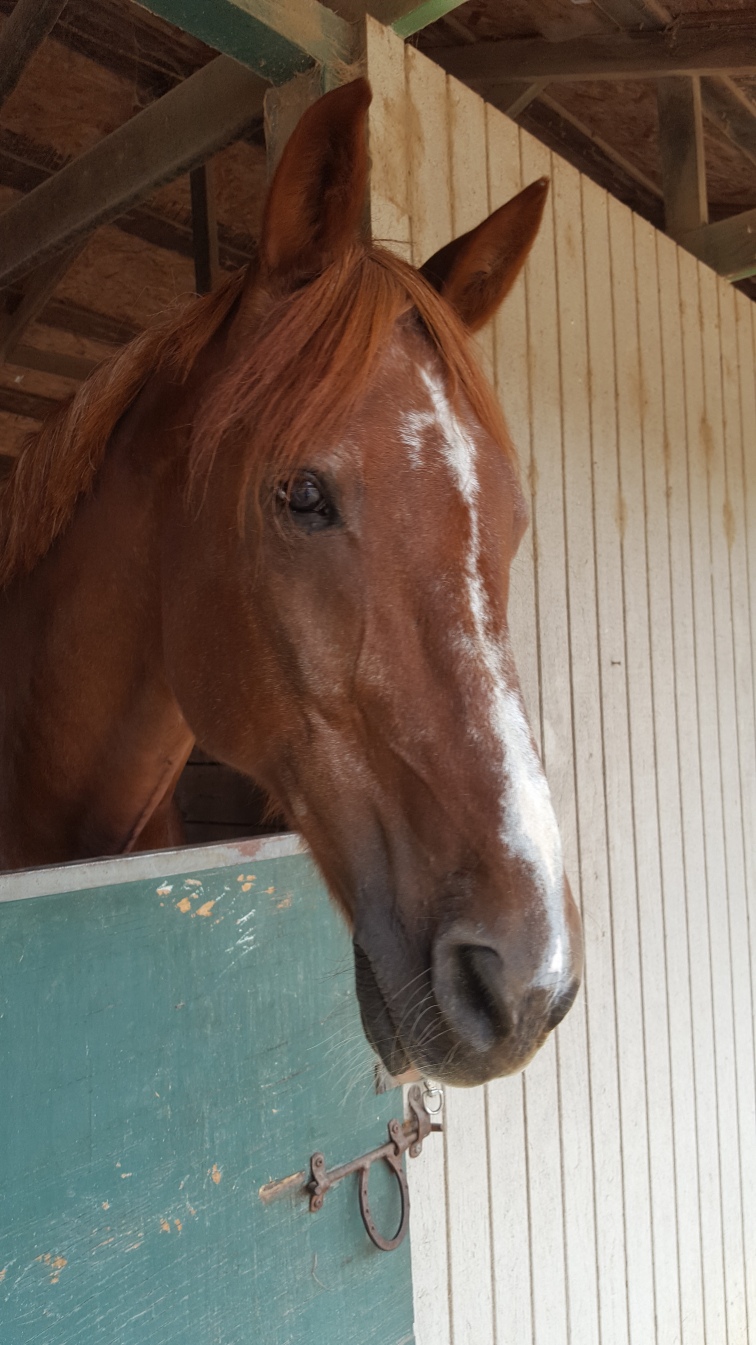 After my quick visit with Blaze I moved onto Dude. As we were walking to the cross ties he managed to get his mouth around my arm in an effort to bite me. He didn’t break any skin though and my arm was just slimy afterwards. So I tacked him up and was cautious with him from then on for the rest of the time I was with him. Nothing exciting happened today with him, just walking around. Kinda boring. I did watch the lesson that was going on while we were in there. 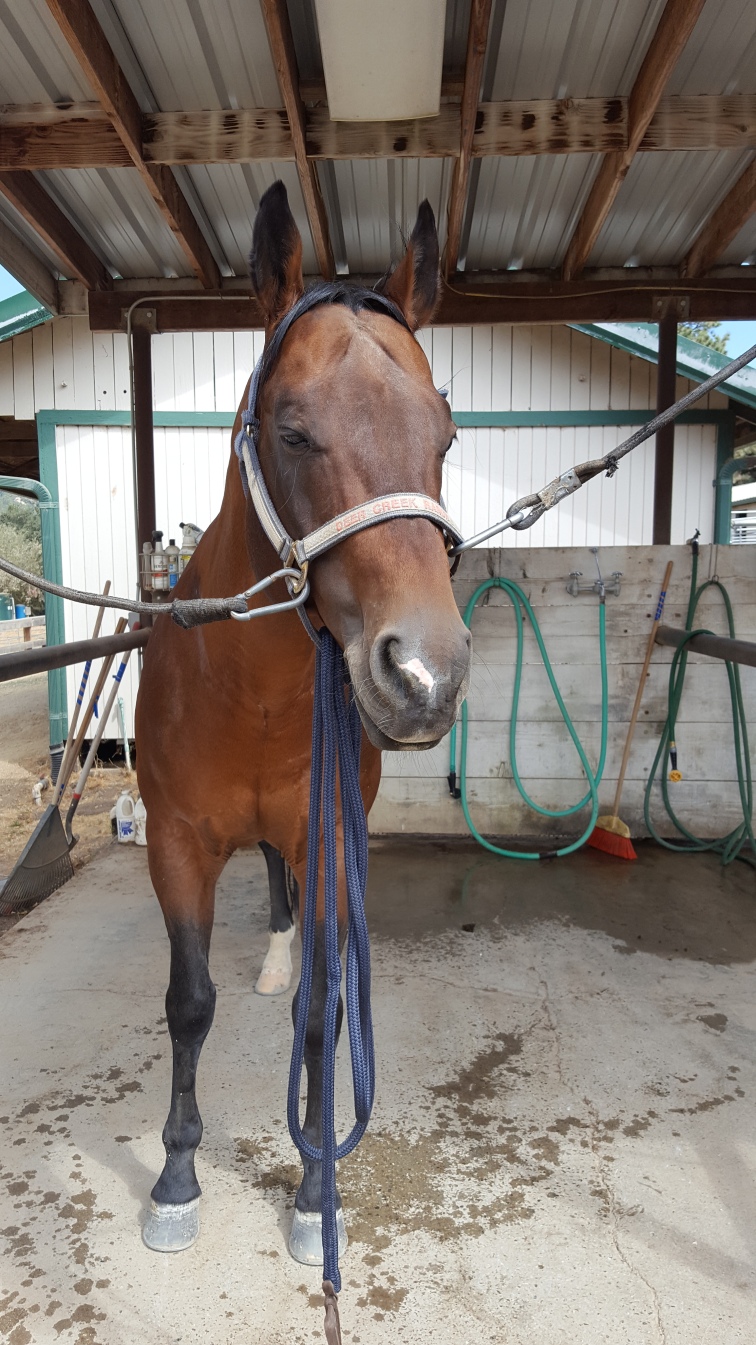 After Dude I worked with Buttercup, who managed to sucker me. So I take her out and take off her fly sheet and mask and then we go to the round pen to work her. I make her trot around both ways and canter and she just doesn’t seem into it today. She’s pretty self regulating when it comes to lunges so I figure that she just doesn’t have anything in her. I take her out of the round pen and then my boss asks how she was. I explained that she didn’t really have anything in her. My boss proceeds to tell me that I have basically been suckered by a lazy pony and to do better next time. But at least she got out and got a worked for a little bit.

I’ve been saying it for years, Ponies are adorable on the outside to hide the evil on the inside, and I fell for it! She’s cute and she’s an older pony and I bloody fell for her ‘I’m tired and innocent’ act. Gah, I’m so mad at myself for falling for it.

I stayed and I cleaned my saddle after putting Buttercup away for the day. I put some nice leather conditioner on my saddle to help revive the leather. I was a bad owner and let it dry out, so now I’m having to pay the price and give it lots of love and attention. Don’t be lazy like me kids, take care of your expensive equipment. Tack cleaning has never been one of my things, so I don’t like doing it. And then the leather started to crack and now I’m trying to fix what probably can’t be done now.

After I cleaned my tack I made my way home. I was silly and went grocery shopping while I was hungry. But I did fairly well. Well, I was bad and bought some candy… sour patch kids. They sounded amazing at the time. I love sour candy, I don’t know why but I always have. I was good and got stuff to make sandwiches… except butter which I just remembered now while typing this out. Balls! Oh well, I got bread and meat. I can work with that. I got a rice bowl for lunch which I devoured while watching Gray’s Anatomy.

I started watching Gray’s yesterday while waiting for my boyfriend and the King to show up. I was feeling a little homesick and missing my cousin who loves the show. So I started watching it to remember last summer when we were over there for her wedding. The show isn’t half bad. I mean its drama, but its good. But no where near as good as M*A*S*H… I love that show.

Oh, so you remember how I had to go into the hospital almost 2 months ago for anafalactic shock? Right, well I just got the bill for that. Almost $4,000 to save my life. Thank God for good health insurance, am I right? I’m also thankful that my insurance decided to cover it because it was an out of network hospital, but I think they forgave me for almost dying.

I haven’t really done anything since I got home besides watching more of Gray’s Anatomy. I think that I’m just charging my internal batteries up for the work weekend.

Have a good one.