I started my day off kind of early, tossing and turning from 5 am basically. I’d fall asleep, wake up, fall asleep, wake up. Frustrating to say the least. I then had a doctors appointment over the phone where we discussed how I am doing on my new medication and what problems I am having. Mostly the sleeping problem. Having problems falling asleep and staying asleep. If it continues to be a problem they’ll give me something so that I can sleep, but they are hoping that its just from not being on my old medication.  We also discussed how my anti-anxiety meds are very addictive (eek), and shouldn’t be taken on a daily basis. Thankfully I don’t take them every day, just on my hard days. Too bad that I’ve had a couple of hard days this week.

So after the phone call I went over to Gucci and talked with the friend who is keeping him. We discussed how maybe if he doesn’t start to eat like normal in the next day or two that I should call up my vet and see what he thinks I should do. Its hard because you can’t force feed a horse. Nothing has changed feed wise, we took everything over. I’ve been cutting back more and more on his bucket because he’s just not eating it and I’m throwing two meals out a day. It sucks. I’ve been pasting him with his medicine and a mix of molasses to make sure that he gets the important stuff. Usually he’d be eating by now. 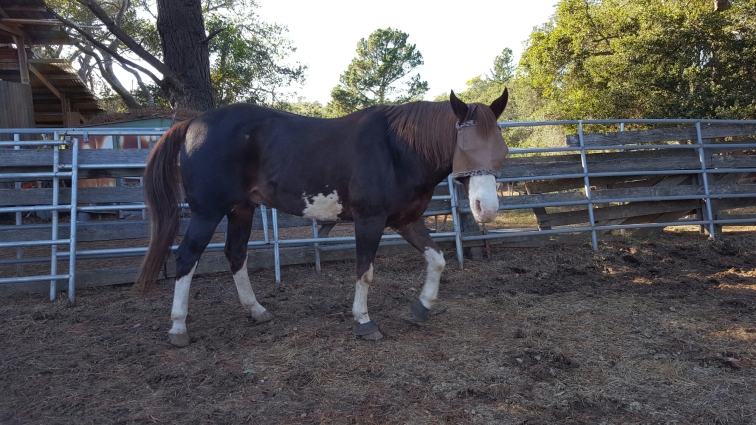 After seeing Gucci I went up to work and I started my day off with Ella. She was no longer off and so I was just to give her a good lunge today since she hadn’t been out since Thursday due to the storms. I ended up giving her a good 20-25 minute workout. Man, was she wild and crazy. I’m glad that I put the bell and the splint boots on her. She was bucking and kicking, giving spurts of energy and I even got a whinny or two out of her. That was just to the left. I asked her to go to the right and she was fine, must have gotten everything out already and going to the left. 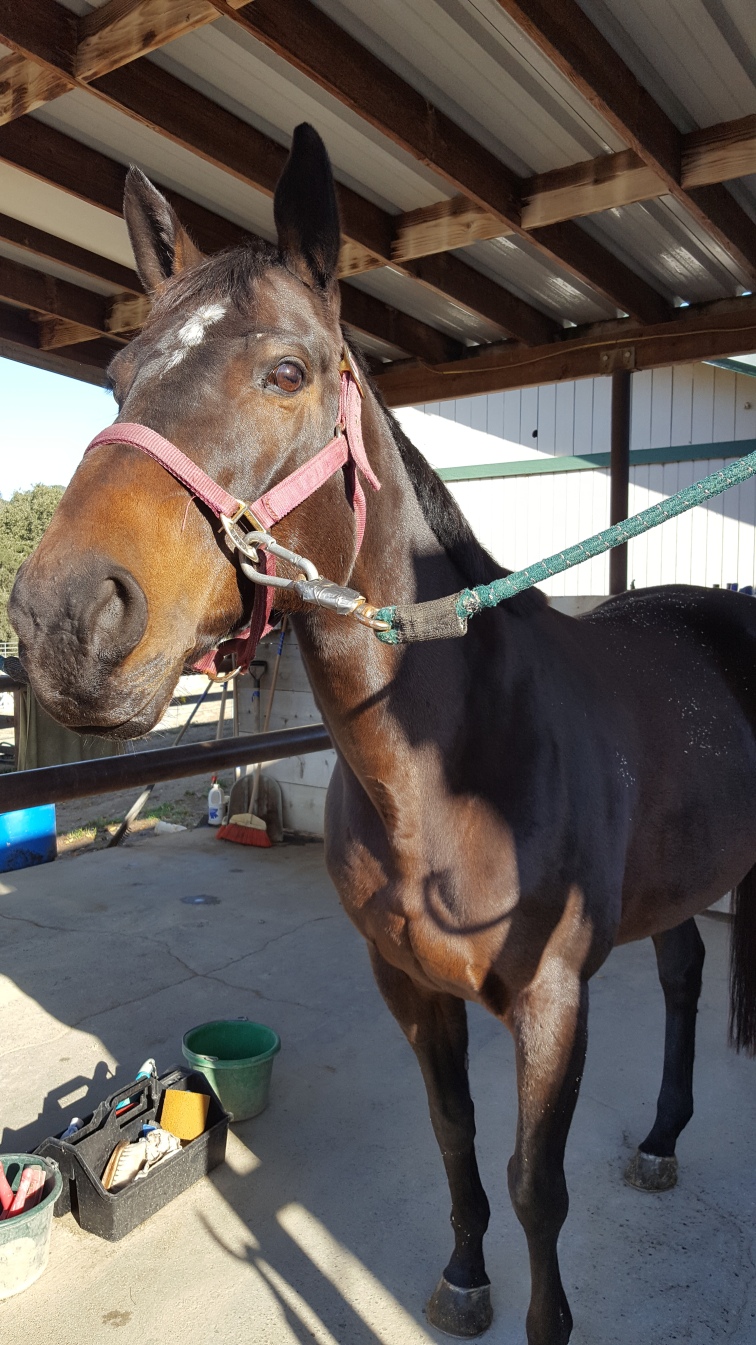 Once I was done with Ella I moved onto Sherman. He was a bit of a difficult boy today. He was unwilling to flex/bend, or to go forward. It doesn’t help that my stamina sucks for some reason. I really need to do some form of cardio every day. Maybe I’ll get back into bike riding. Sorry, back on topic. We’d do a lap at the trot, and then we would walk. This was the pattern for the ride because I was out of breath by the time we went around. I think its worse when the horse is lazy and makes me work harder than they have to. So I asked him to canter and we cantered numerous laps both way. I kept asking him to drop his head and get into form and he just wasn’t willing to do it today. 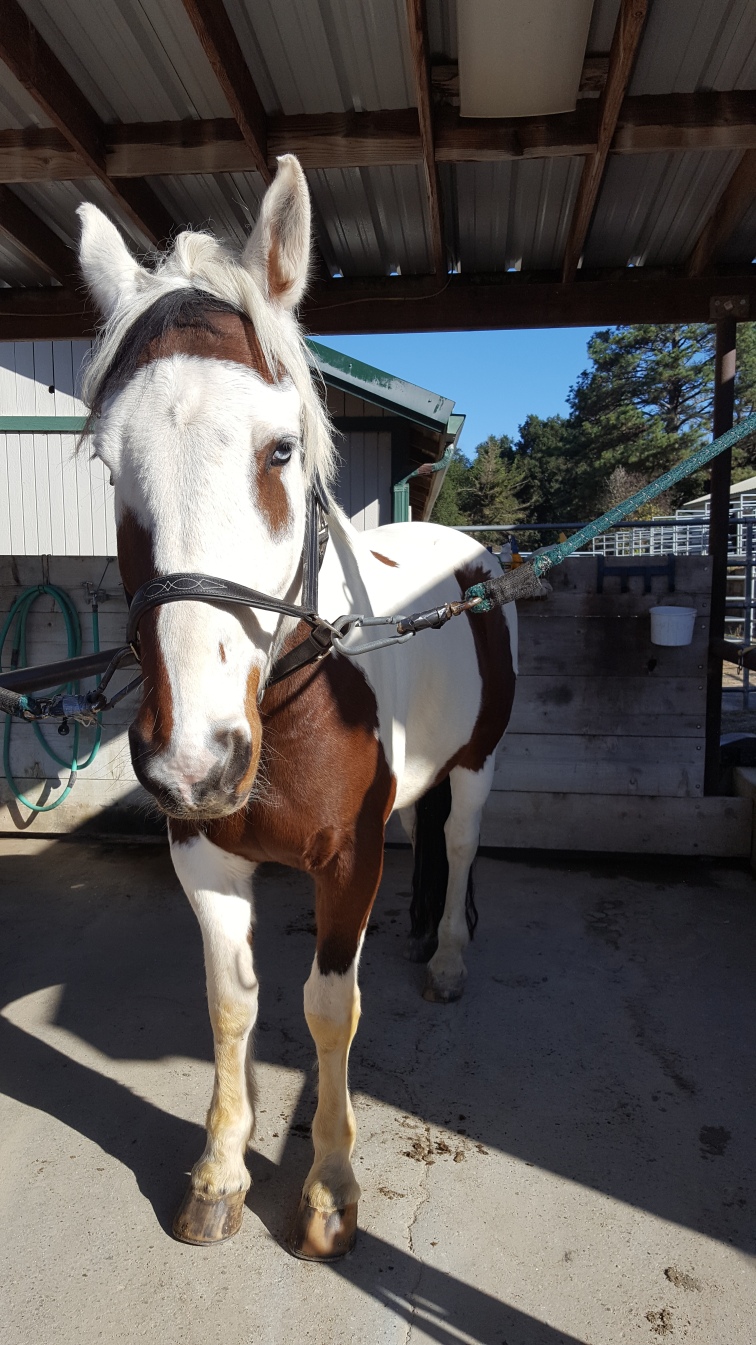 When I was done with Sherman I worked with Dude. Dude is back to trotting now, yay! Its a step in the right direction for him, which is a nice thing to see. He just gets to trot on the straight parts 4 times in the 20 minutes walk, but that will start to increase each week. I trotted him every 5 minutes or so, and just for the little straight away bit. That was my ride with Dude. 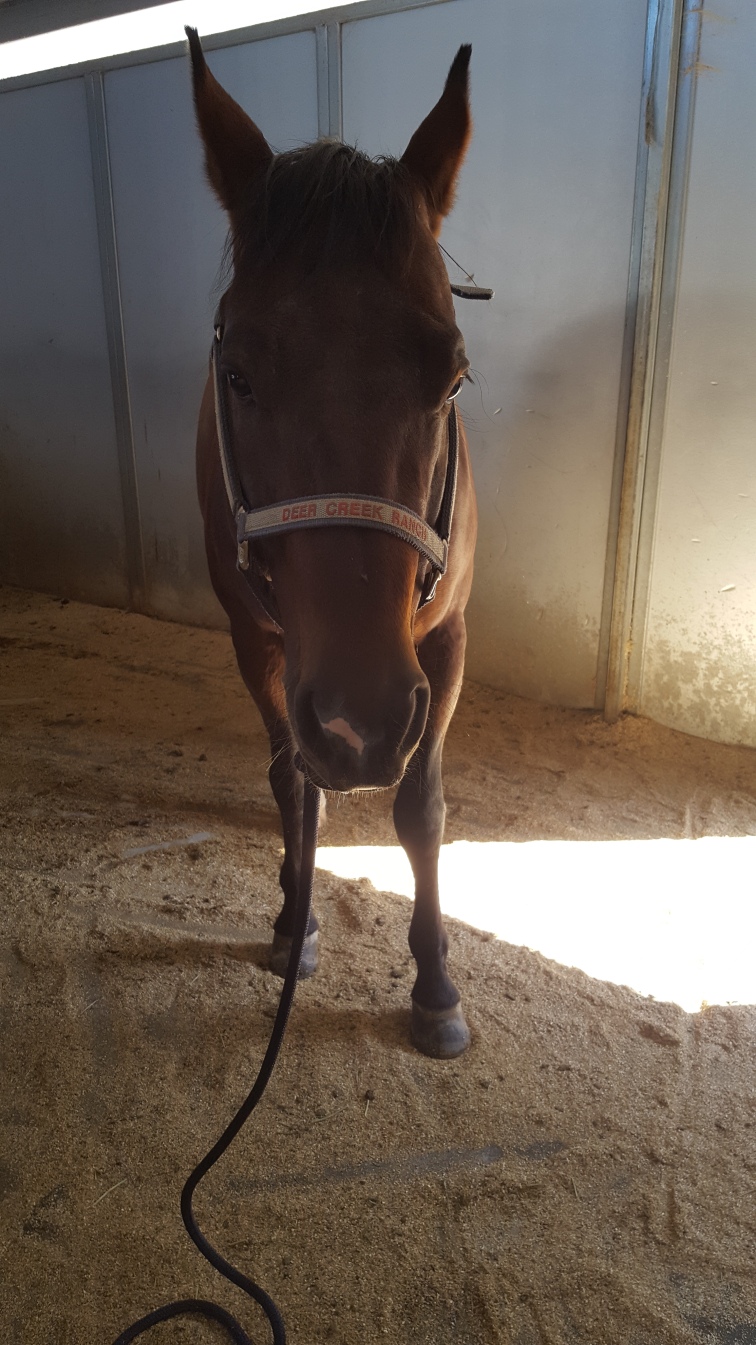 After Dude I worked with the Icelandic, Festi. I forget how weird she is to ride. But I was able to trot on her today and post even! Usually she just tölt’s her way around the arena, which is very hard to post to. But I guess that is a good thing because that means that she has a smooth gait? I’m just assuming, I don’t really know a lot about riding Icelandics, but I am very grateful for the experience that I am getting. I’m getting something from each horse that I ride and work with, even if we are having a bad day or my health is getting in the way. 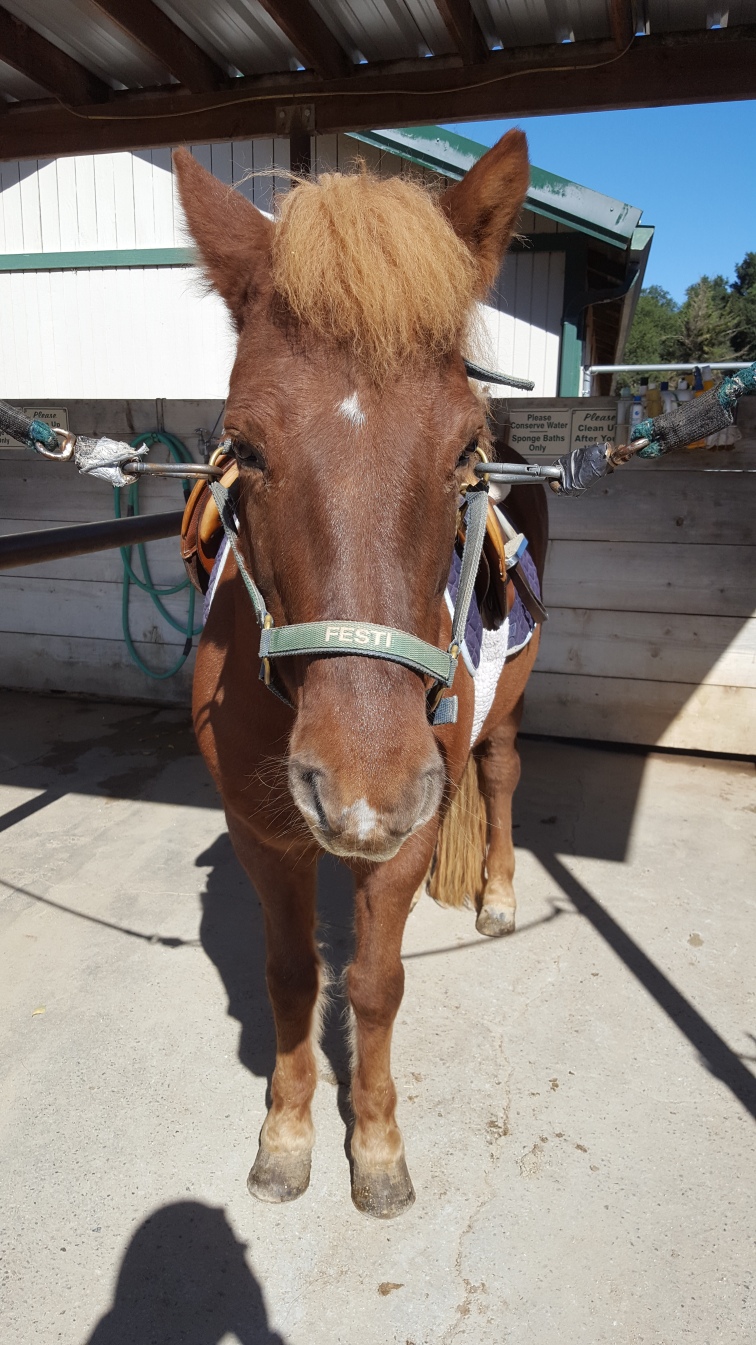 While I was riding Festi, Diamond was out and about having a lesson. I recorded one of the courses that he was jumping. This is about a 3′ course.

After I was done with Festi I was done at the barn for the day, so I left and went to my parents house and hung out over there for a while. I watched Alton Brown’s Good Eats. I always love watching that show. They had on a Halloween one and then was followed by 2 chocolate foods episodes. One involved making brownies… Hmmmm…. Brownies…  Brownies are like cake. You make them to eat the raw batter. Delicious batter. Sorry, easily distracted apparently.

Have you heard of TeeFury? They have really cool t-shirts of the day. I was bad and I ordered the one from today. Its a mix of The Last Unicorn and “My Little Pony.” How could I pass it up? I love The Last Unicorn. I even have an autographed copy of the movie signed by the author. And we have the comic and a copy of the book. I have an image of it above my bed of the unicorn inside The Red Bull that my boyfriend found for me a while ago. Its cool. But anyway, here is the shirt that I ordered. 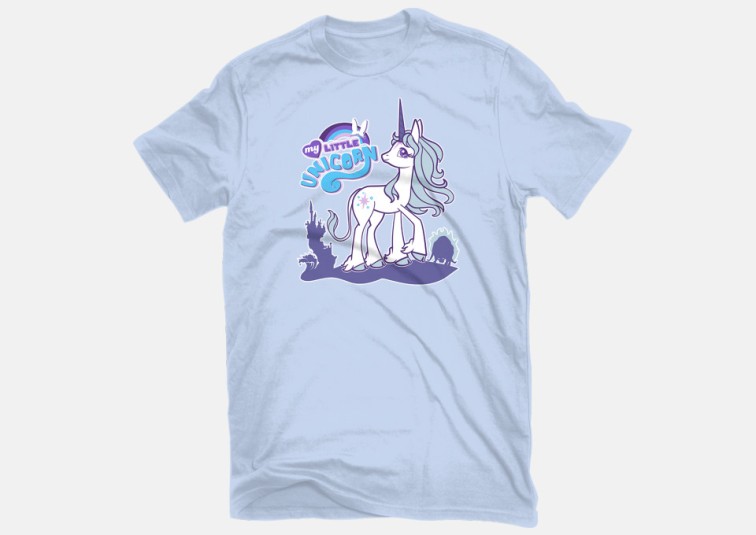 I went back over to feed him dinner and saw that he hadn’t really eaten through the day. I decided to call the vet and wanted to ask him questions. I explained what was going on and how he wasn’t eating, and the receptionist said to take his temperature and shed have the vet call me back. 2 hours later and I’m still waiting for the call. But he doesn’t have a fever. Sitting at 99.7°. And we did get him. To eat something, which is good. As I was hanging out with Gucci in his stall some deer came up next to us and started to eat. I managed to be sneaky and get some photos. 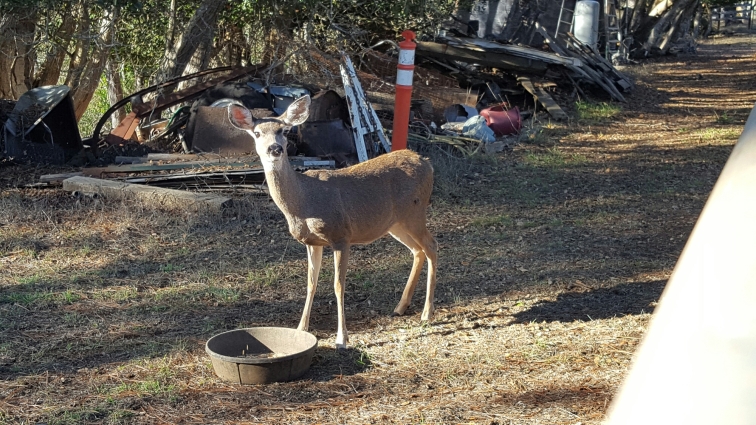 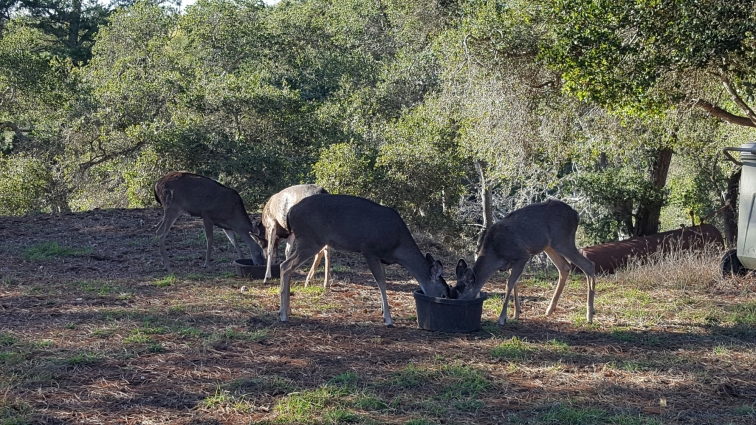 Have a good old qh butt too while you’re looking. 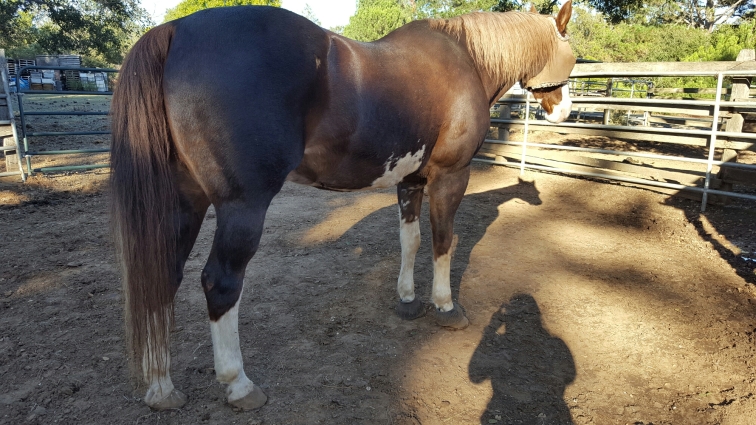 Alright, time for some dinner.