How often do you hear that? Well, its a happy Monday because its one of my days off. So :p I woke up and ate my last muffin, watched some Bitten, and ran to the feed store to get Gucci his alfalfa.

My mom was still sick, so she was up in bed and I hung out with poppa for a while. It was nice spending time with him. Once he was done with breakfast we went outside and unloaded the bale and let Gucci out for a graze.

I waited until he was away from the truck to start it and put it back next to the big truck. I then gave him a fresh bale of shavings, brushed out his mane and tail, and groomed him. Man, was he shedding. There was fur going everywhere. I then went back inside with poppa and helped him with some computer stuff, and helped him clean up the house a little bit. When it was time to leave I went over to Gucci and saw that he had enjoyed his shavings with a nice roll.

I came home, watched some more Bitten and got ready for my interview at the feed store. I decided to walk down the street to the store since its so close and it wasn’t raining and it wasn’t meant to start raining until 5. Well, the weather app on my phone lied, it started raining during my interview. Oh, and I finally learned the name of one of the cats that reside there, its name is E.T.

Katie showed up and explained the job to me, explained that 2 people were going out and will be gone all summer, but they are hiring for long term, which is good. That it is literally a mom and pop store, now becoming a sister brother store. She then asked some questions of me, and then showed me around the store, explaining the departments. I even got to see some baby chicks. It went well enough that they wanted me to come back next Monday and do a trial day, which is pretty cool.

On my way home in the rain, that started pouring because of me and my big mouth, I saw this beautiful cherry blossom tree. 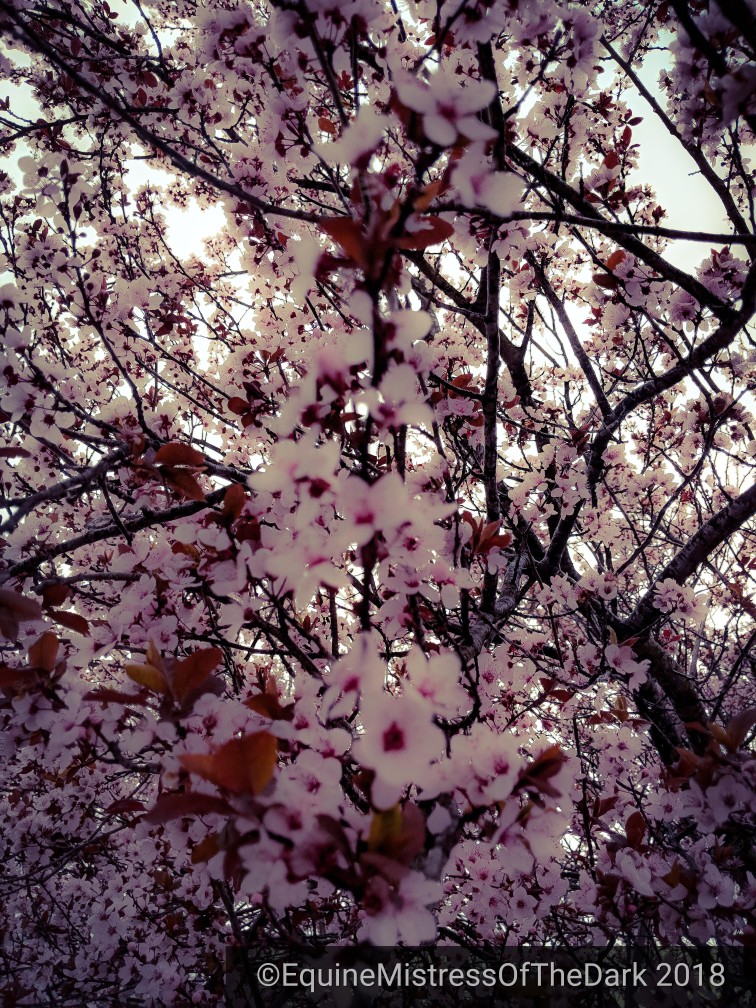 After dinner Fiks wanted to bake, so we made some coffee cake cupcakes. Well… I did. He got distracted and on a mission for the recipe for car bomb cupcakes. 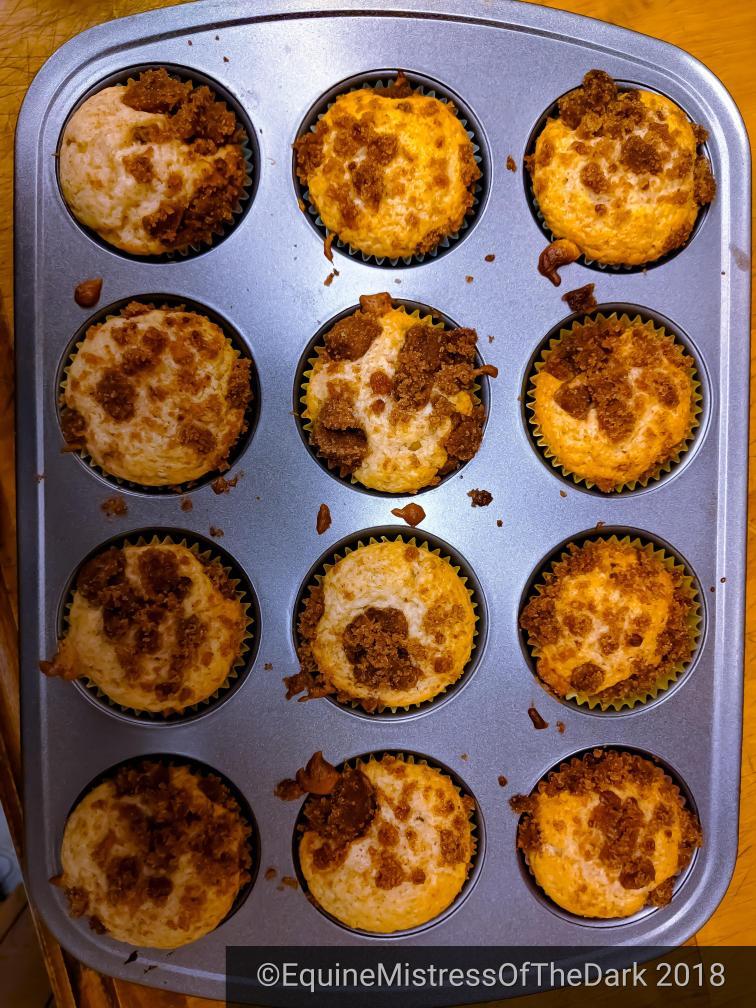 It was still raining on Tuesday morning. I woke up and had one of the muffins, got dressed and went to my doctors appointment. Well, it was with a nutritionist, trying to help me loose weight and eat better. She gave me handouts and some recipe ideas. I think it went well and Im going to make an effort to focus on her advice and eating healthy. My grocery list is going to be huge!

I was getting ice for my water jug and it was all huge and one frozen block, so I bang it in the sink to get it out. Well, it decided to cut me on the way. It’s not bad, just a bleeder.

Work went fine. I talked with Bill the nun about how frustrating boys can be. Yes, when they are being dumb/frustrating/childish we call them boys. It was slow at the bank for most of the day. We did have a few rushes though.

Wednesday was another wet day. I had another doctor appointment today. So I did that in the morning. As I was taking the back roads to my parents house it was positively pissing down rain. Couldn’t get my windshield wipers going fast enough. But I got to my parents okay, and said hi to Gucci then went inside and hung out with my parents for a while. Then I went and fed Gucci lunch.

I came back in and mom wanted to watch some Victoria, so we watched the first episode of season 2.

I went to the grocery store and and did our shopping and some shopping for mom. I bought some more healthy foods for the week, stuff that the nutritionist recommended. And stuff for Fiks car bomb cupcakes.

Thursday started out okay. Talked with Fiks and Bill the nun for most of the morning and watched Monk. Got ready for work, left early, just to be stopped by an accident on the freeway. And by the time I go to the next off ramp the accident had cleared up. So I sat for 20 minutes to go a mile.

I got to work on time, and it was positively pissing down rain. It had been raining for a while but wasn’t too horrible. And I had to go inside to dress. Once I came out I had to go outside and give some backup to the other security guard that roams the property. We had to get the cops involved, he called me a witch. It was a great time. Not. Then I had to deal with a pan handler twice. I just hope tomorrow is better.

Friday morning wasn’t better. It was a very rough start. I won’t go into details minus it was rough. But once I got to work things seemed to smooth out. Nothing happened at the bank. There were a few customers that I kept my eye on, but nothing evolved out of their attitudes.

So I’ve been calorie counting since I saw my nutritionist and I grabbed muffins on Wednesday at the grocery store like I have been doing for weeks. Well, I went to go and enter the muffin, and it was nearly 500 calories! That’s 1/3 of my daily intake. So needless to say probably no more muffins for me. I’ll go to bagels or English Muffins or something. Needless to say, my diet hasn’t been great today.

I came home and saw a Pelican on my neighbors patio.

I texted her where is the giraffe, she’s not allowed to have a pelican without a giraffe. She’s yet to respond and if you get that reference you get a point!

I also came home to Fiks baking cupcakes. Irish carbomb cupcakes for St. Patrick’s Day tomorrow. I think he’s planning on taking some into work since he can’t go to amtgard tomorrow due to work. But here is what I discovered when I came home. I haven’t added any filters or anything to this photo, this is honestly how dark they came out.

I had to do a mad dash to the store to get some butter for him because he miscalculated on how much he really needed.

Cupcake holes for the ganache! 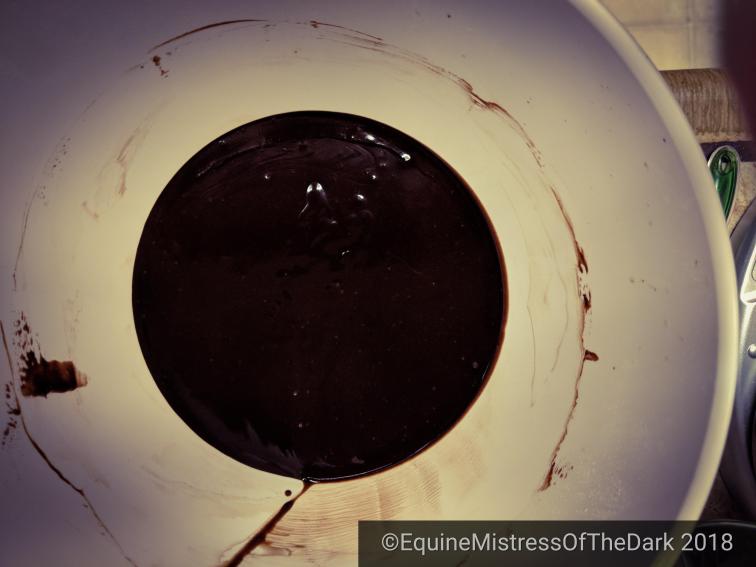 Ganache inside the cupcakes….

And then the cupcakes with the bailey’s frosting…

I was really comfy in bed. I didn’t want to leave it. But I did and came to work. It was a slow day. The forecast predicting rain kept all but the most hard core of golfers away. I did have a pretty view on my patrol this morning. The photo doesn’t do justice.

I spent the first half of the day talking with Bill the nun about wedding stuff and looking at pintrest. Towards the end of my shift, while listening to Halestorm, we had a hailstorm.

Not used to getting hail in my part of California. My truck hasn’t seen snow in 7 years. 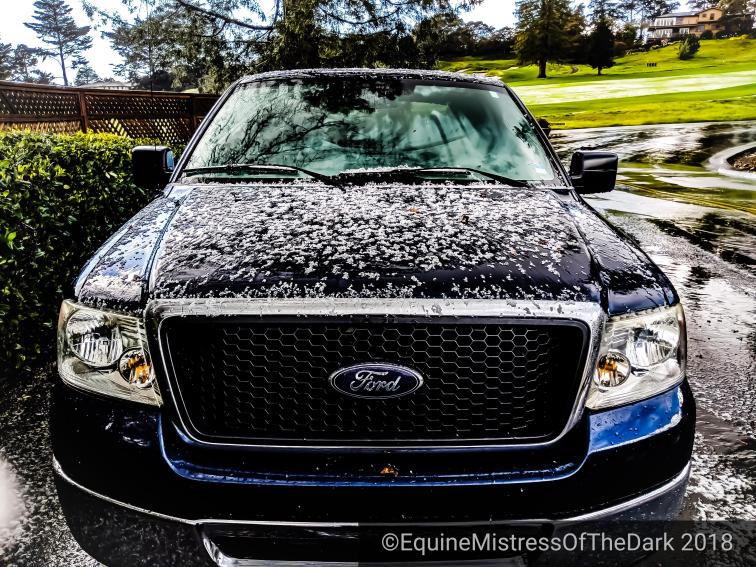 Nothing really happened Sunday. There was no family dinner due to my mom not feeling well, which means no wedding talk. And no Gucci time. I wanted to let him out to graze but poppa had already done that. Fiks and I were both in a funk by the time I got home. We finished watching Darby O’Gill and worked on figuring out dinner for the night.