The day started off kind of early, my brother wanted to borrow my truck for a few dump runs and he left me his car. I crawled back into bed after the exchange. I got some more sleep then I decided to upload the Darkshore photos to Facebook. And Facebook in all of its glory was being stupid. It would only let me upload a few photos at a time (The best of were 611 total photos, out of 2500), and then it would give me this error. 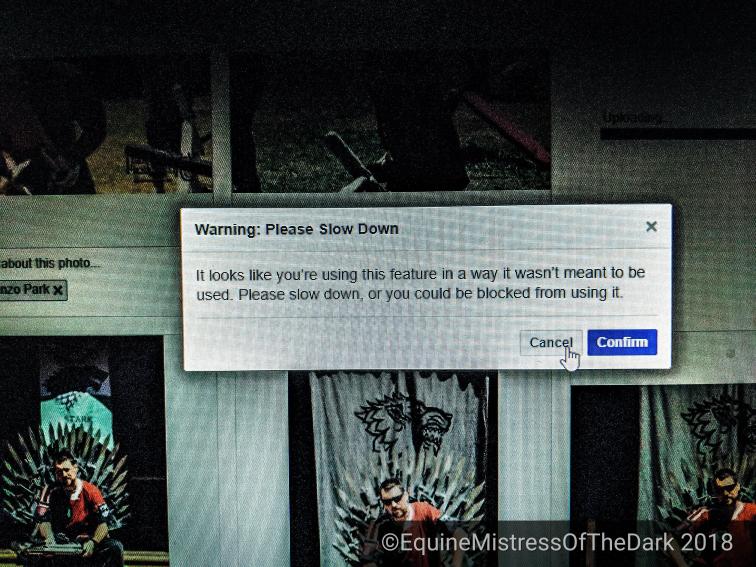 I talked to Fiks and we cleared the cashe, rebooted the computer, and I was able to get some more done. But then the error message started to pop up again, didn’t matter if I cleared the cashe or not. I got 500 photos up before they banned me from uploading the rest of my photos.

I logged a message through the inbox and all I got was a ‘Thanks for the feedback message.’ So dumb and frustrating. Since I couldn’t do anything else with Facebook I decided it was time to go and see Gucci.

I got dressed and jumped into my brothers Golf GTI (soooo much fun to drive! Zoom Zoom!) and went over to my parents house. Well, when I was pulling up Gucci was already out grazing. So I slowed down and rolled up quietly. Gucci didn’t recognize the car and spooked at it, and stayed away until he hear me speaking to poppa. Then he came galloping over to me to say hi. Such a silly boy. He then followed me and poppa around the property while we were both puttering.

I helped poppa change the lights out on the big truck. The light that sits above the window and then the right tail light. Mom came down to say hi, she wasn’t feeling well still, and I helped her with a few chores before leaving. My brother said that he was done with the truck and I could come pick it up anytime, so I did.

Then I came home and tried to work on Facebook photos again. Nope, still blocked. Fine, I decided that I would start approving tags in the photos that had been uploaded. Nope, got another error message.

I tried to upload more photos  a few hours later but Facebook said I was still blocked. I asked a fellow photographer if she had problems loading up her photos, she said no. So I said Fuck You to Facebook at left it alone.

Fiks came home and jumped on the computer and was able to load them up with no problem. No error messages or anything. So frustrating, it kinda bummed me out. I know that I should let it go, but the whole thing just pissed me off.

I didn’t sleep good Monday night. I woke up at 1 am and was wide awake for some stupid reason. I did all my usual tricks, not one of them worked. I ended coming out to the living room and lying down on the sofa. At least I got some sleep there, even if it was only in fits and spurts. I crawled back into bed around 6am and turned on Harry Potter and fell asleep to 930. I didn’t want to go to work, it took me 2 anxiety pills to get me out the door. I usually only take one.

Work went fine. One of my favorite tellers was back from her vacation in Las Vegas. And they had this evil table filled with chocolate strawberries.

The manger was awesome and told me to help myself, so I ended up eating 4 at work and then I brought home 6 more. Nom Nom Nom. I even shared with Fiks.

It is currently 12:18 am as I write this, listening to Harry Potter and the Half Blood Prince. I’m having problems with restless legs, and I’m going to try to remember to bring it up with the doctors appointment I have later on today. I did some foam rolling to help with the spasms.

In the wee hours of the morning I worked on our Save the Date cards again, inputting peoples name and addresses into Shutterfly. I’ve got 29 couples/people getting a card, and some are going to England, so there is a plan with my cousin. CAHOOTS!!!

I think I finally fell asleep around 3.. Maybe 4… Enough for 1 1/2 episodes of BBC’s Sherlock. Then I crawled back into bed and slept a good hunk of the morning away. I got our groceries while listening to The Greatest Showman soundtrack, then headed up to my parents.

After poppa and I unloaded the 2 bags of feed I got Gucci out and hopped on his back and we walked around for like 20 minutes or so. It was nice to be on his back again, but I can tell he’s lost some muscle mass up there. I guess that’s what you get for not working out for a couple of years, and just being an older horse. 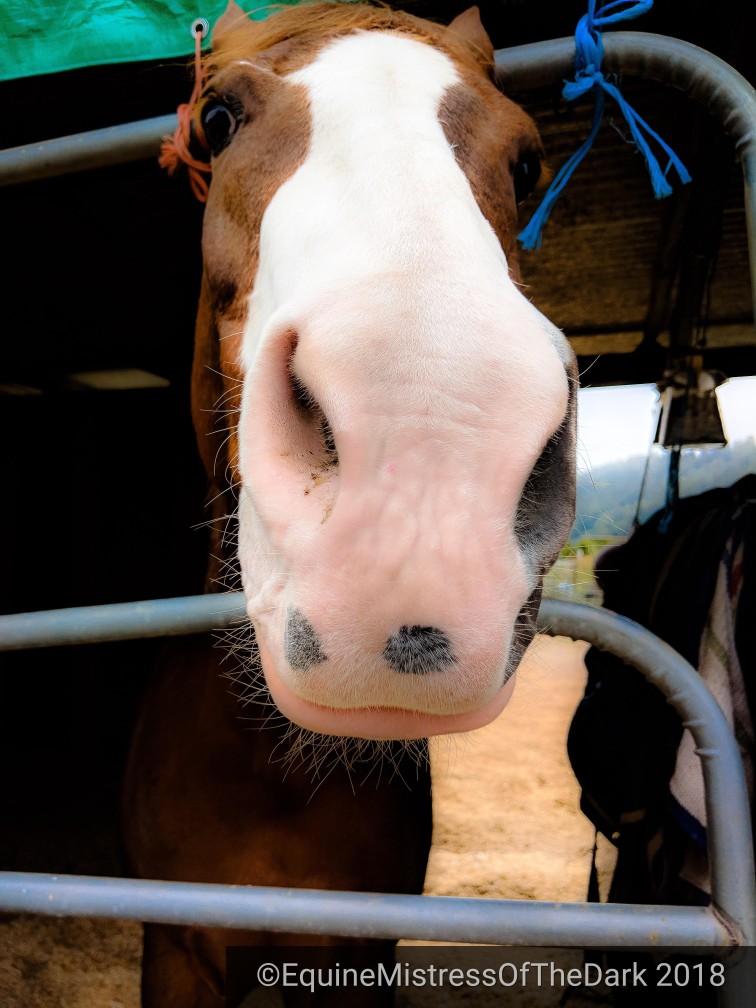 Mom came home from getting her nails done, and then she started talking about the wedding dress and that we should order it soon. I love her to death, but I was already stressing out about wedding stuff last night, so that just added to it. But she doesn’t know that. So I emailed the store I want to get my dress from to ask them a few questions.

I got the final address from someone for the Save The Dates, so I think that is done. I’m going to let Fiks have a look and just double check that we have everyone. I’ve spent most of the afternoon reading my book and watching some TV. I finished the episode of Sherlock I was on, and then I put on a movie. I got an email back from the dress shop and set up another appointment to go and see the dress again before ordering for Wednesday next week. Yay!

Thursday was fine. I don’t really remember what I did on Thursday morning, probably the same of flopping on the sofa and watching some TV. I don’t think I did anything amazing otherwise I think I would remember. I went into work and work was fine. It was one of the teller’s birthday so she had balloons and flowers, and I might or might not have partaken in tequila shots in the back of the bank. Fiks had a BoD meeting Thursday night, so we ordered some Chinese, which I picked up and ate some before he got home. I watched Monsters University, I wanted to watch Coco, but since neither of us had seen it, Fiks said he’d be too distracted by it trying to watch it.

Friday was alright, it rained on me on the way to work, which was weird. There was no prediction for rain to my knowledge. But it wasn’t raining when I got to work, so I guess that’s a good thing. Work went fine, I did see this little dog that looked like Falcor out of The Never Ending Story. 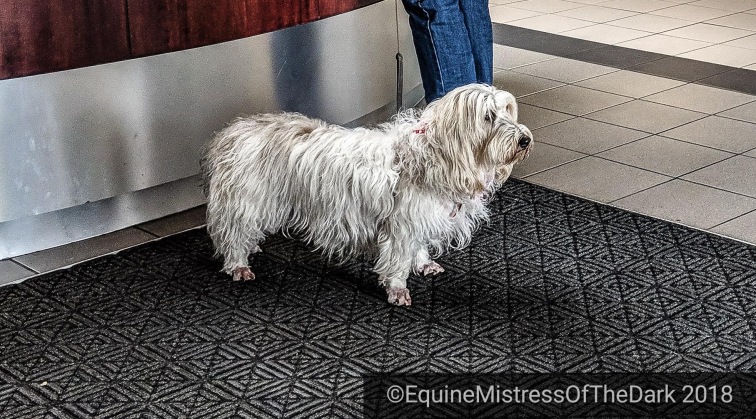 On his way home from work he saw that the local brewery was having a Fish n Chips night and wanted to go. So I said yes, so we went after we got cleaned up. It was alright. Minus the fish being cold in the middle. Fiks enjoyed a brew, and wanted more so he got a can, an actual can, of the beer he wanted. The plan was to take it up with him to Crimson Wood. (Yeah… that didn’t happen.) 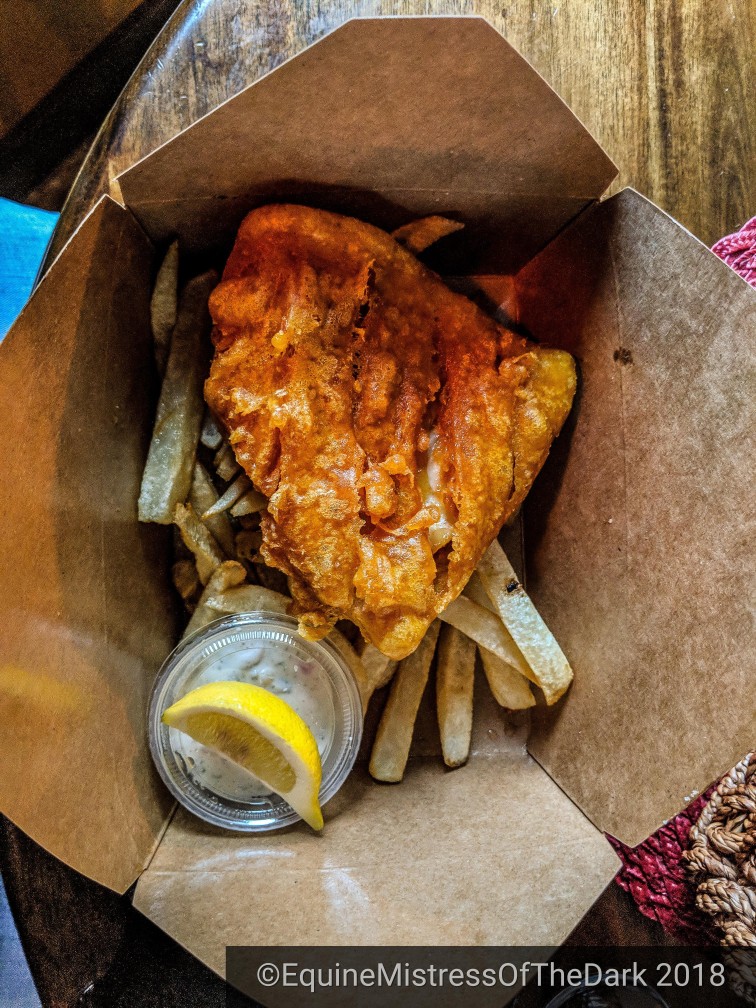 After we came home we worked on our Save the Date cards. Went through and made sure we had everyone we wanted, made sure the spelling of names and addresses were correct, stuff like that. We went to place the order and it said that we were leaving a text block empty, would we like to proceed? Well, we decided we wanted to put something back there, so we worked on quotes. “Do you think it’ll work?” “It’ll take a miracle…” was the first one. Its from the Princess Bride. We quote that movie a lot but I thought it didn’t send the right kind of message. We then tried Monty Python Quotes on love, and couldn’t really find any that applied to us. Then Fiks had a great idea (that I’m not going to spoil), and we finally found a quote that fits us and our relationship. Then we went to go and pay, but thankfully, I had a discount code.

Saturday went alright. Well, while I was doing my first patrol I remembered that we were missing someone on the save the date list with the fancy printed cards. We will just have to hand write it our now. To whom that is, Sorry! Fiks and I both love you, and I can’t explain why we didn’t think to double check that you were on the list.

I didn’t realize until lunch time that my work phone was dead, so I had to charge that the rest of the day. But I got through listening to my podcasts and reading my books. They had some pretty tulips in the bathroom at work today, so I grabbed a photo of those.

Its Saturday night and I’m home alone. I’m not quite sure what to do with myself yet. But I’m sure I’ll figure something out. Maybe watch some junk TV. I ended up watching Doctor Who on Amazon Prime, but I was dissapointed to discover that they didn’t have The Day Of The Doctor or the last Matt Smith Christmas Special. Just boom, straight into the Peter Capaldi era. But it was nice to see that all of Season ’10’ is available now.

I didn’t sleep super good last night, so I’m kinda tired today. Work went alright. Well, it didn’t start alright. When I showed up I saw that someone had broken one of the main gates during the night. Bastards. So now the gate is broken.

The didn’t do a half assed job either. Fully broke it. Broke the screw and everything. I spent my first hour of the morning scrolling through the footage trying to find when it happened and if we could see who did it. Well, it happened at 2303 hours, first the rammed it open with the car, and then to get the car out a guy got out of the car and pushed the rest of the way, breaking it.

Minus a phone call to come and open the doors at the pool and talking with the head of the home owners association, nothing else really happened. Oh, there was a wedding, and a rehearsal dinner at the same place apparently. Weird. I hope that the people showing up for the rehearsal dinner figured out where they were going, because I had no bloody clue.